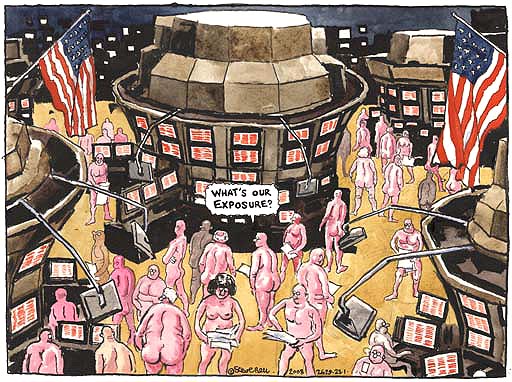 As the financial crisis continues to evolve, the U.S. government plans to adopt relaxed monetary policies to save the market. And for this, all parts of the world are staying on high alert. On April 10, Hong Kong’s Wen Wei Po published a signed article indicating that the U.S.’s power consciousness will not change and that we should all be vigilant of the U.S.'s exporting inflation. Extracts from the article are shown below:

The late great American economist Milton Friedman once said that as long as the U.S. Federal Reserve drops money from a helicopter, the problems of economic recession and inflation can be solved. This means that the market can be saved as long as quantitative easing monetary policies are implemented, meaning the printing of money in full force. In 2002, the academician and present Federal Reserve Board Chairman Bernanke said the same thing, explaining his theory on monetary policy and practicing what he preaches. Either it is just a coincidence, or it may be an economic guru’s enlightening remarks and farsightedness that have enabled Bernanke to put this saying to use.

The U.K. took the lead in announcing that it would initiate and implement “quantitative easing” monetary policies by having the Bank of England buy government bonds, lower long-term interest rates, and revive revolving credit. On March 18, the Federal Open Market Committee quickly followed along and announced that within the next six months, it would buy $300 billion of long-term government bonds in order to relieve pressure on private credit markets. It looks like the U.S. government has run out of tricks; the only option is to run the massive money printing presses in high gear and act out the myth of “inflation saving deflation and bubbles saving bubbles.” The only people who buy into this would still be those creditors who fear depreciation of foreign debt but have no other alternative.

Most markets expect that Europe, Japan, and other countries may follow the example of the U.S. Federal Reserve and successively adopt extreme monetary policies. The power of quantitative easing monetary policies cannot be underestimated. If each country considers import-export trade protectionism, currency safety, deflation remedies, etc., and all follow along, there may be short-term stimulation of the economy, but in the long term, it will certainly result in hyperinflation on a global scale. If things go on as Warren Buffett says – that a period of hyperinflation may exceed the global inflation crisis of 1973 – then what awaits the world is not just in a bitter economic chill but rather in an endless Ice Age of stagflation.

Quantitative easing is a double-edged sword

The continued, excessive issuance of the U.S. dollar is relieving the U.S. economic bubble and causing the unemployment rate to increase quickly. (It already exceeds 8.5%.) It has caused the economic recession to worsen and has also promoted the draining of floating capital out the U.S. and Europe, into Asia and emerging markets.

At the same time, with the U.S.’s and the U.K.’s complete implementation of quantitative easing monetary policies, the global base money supply will continue to increase. A new storm of hyperinflation has already begun to brew quietly. According to statistics, just in January of this year, the monetary base increase reached 107%, which is the first time since 1908 that a three-digit increase has been seen. Perhaps, this will enable us to predict with certainty that global hyperinflation will erupt.

China is already the U.S.’s largest creditor nation, and in the future, China should be all the more careful to adjust the structure of its strategic foreign reserves; increase strategic energy sources, resources, and technological reserves; pay more attention to changes in its own economic development and adjustments to its industrial structure; and balance the structure of its production capacities. China should also further strengthen, perfect, secure and create new laws, systems and policy arrangements to ensure strong domestic demand. China must proactively address this potentially imminent crisis of hyperinflation. This goes back to the saying of not believing in “crocodile tears.” Although the U.S. has had many different presidents and political party changes, the U.S. deep down has a mentality of hegemony, a logic of power, and the natural instincts of a bully. This will not change.

1 Comment on U.S. May Create “Super Inflation” and Make the World Suffer