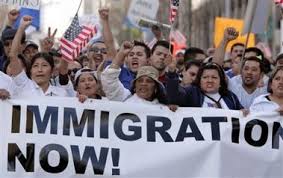 “Our laws should respect families following the rules — instead of splitting them apart. I believe we can put politics aside and finally have an immigration system that’s accountable. I believe we can appeal not to people’s fears but to their hopes, to their highest ideals, because that’s who we are as Americans.”

These were the words of President Obama in his speech in support of the reform on July 1 in Washington. Now, organizations in defense of a new immigration system are taking advantage of his rhetoric to remind him of the impact of deportation on immigrant families.

Illegal immigration and border security have monopolized the debate on immigration reform so far. Despite the president's commitment to change the immigration system, organizations and activists are protesting not only because of the delay, but also because of the work that the administration has done to increase deportations.

Obama is going to beat the records left by Bush. According to The Washington Post, the figure is about half a million people. The government has repeatedly insisted it makes no sense to deport all of the undocumented immigrants who illegally entered the country, but the figures show a significant effort to expel those who are undocumented through an open legal process of deportation.

The organizations in favor of the reform and against mass deportations have developed several messages for the president but have not needed a new script. They’ve just used Obama’s arguments.