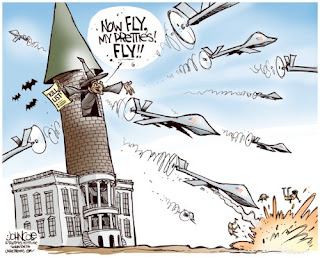 Finally, torture and drone killings are on the daily agenda

The good thing about John Brennan’s nomination for the position of future CIA head is the debate that the nomination has unleashed: Finally, the “targeted kills” with drones that Washington has been conducting intensively, as well as secretly, over the past four years are a topic in the U.S. Congress. Finally, the systematic torture in the “war on terror,” for which no U.S. official has ever been condemned, is on the daily agenda.

Finally, representatives are dealing with the never publically discussed international collaboration in the imprisonment, extradition, concealment and torture of at least 136 people who were considered “terrorists.” And finally, the Obama administration has decided, at least for the congressional representatives in charge of intelligence services, to present a document delivering the legal arguments for “targeted kills.” That is long overdue.

In the process, a small group of anti-war activists is due special respect: “Code Pink.” Their members — predominantly women — already took to the streets under ex-President George W. Bush protesting infringements upon national and international law. They are bravely continuing to do so under Obama. At Brennan’s hearing before the U.S. Senate Select Committee on Intelligence, five Code Pink members in a row denounced the illegality of drone strikes with interjections and banners. Finally, the entire group was expelled from the room.

At the same time, large U.S. media outlets have proven once again how closely intertwined they are with U.S. military and secret services. Not until this week did The New York Times and the Washington Post report about a U.S. drone base in Saudi Arabia that they have known about for two years. Meanwhile, the CIA sent drones on kill missions in Yemen — among others, against two U.S. citizens.

And now the bad news: John Brennan might be confirmed as chief of the CIA despite all of the senators’ debates. With that, they would be deciding for a man of continuity. Brennan transitioned seamlessly from his work for Bush in a leading position in the CIA to his work for Obama as counter-terrorism expert in the White House. Under Bush, he justified secret imprisonments and torture. Under Obama, he justifies killing by drone.

Presumably, the meaning of the CIA in U.S. “national security” would continue to grow in the Brennan era, particularly in relationship to the Pentagon. While Obama wants to avoid new ground wars and has even entertained a certain cut in the military budget, no one up to now has put limits on the CIA’s drone war.