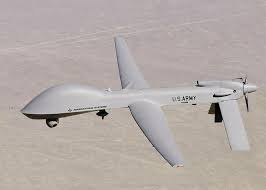 Drones kill the enemy from a distance, precisely and inexpensively. One’s own soldiers don’t die in the process. Civilian victims are minimized. That is the ideological essence of drone warfare. It is very seductive. U.S. President Barack Obama has relied on it for a fairly long time; more and more governments are following his example. The armament spiral is in full swing. Over 90 countries are developing drones or already have them.

[German] Defense Minister Thomas de Maizière is also a declared proponent of drones; it is only for electioneering reasons that has he now moved away from the idea of immediately equipping the German armed forces with drones. Like his counterparts, he expects to achieve security through this new weapons technology.

The reality of course looks different. Drones are deployed today almost exclusively in tribal territories — in border areas between Afghanistan and Pakistan, Yemen, Mali, the southern Philippines and Somalia. The tribes have their own code of honor: "For every innocent person killed, it creates 100, 200, 1,000, or 10,000 new enemies for the United States,” says Pakistani author Akbar Ahmed. He has written a book about the drone war that is as distressing as it is enlightening: “The Thistle and the Drone.”*

There one can read what the drone warriors do not want to hear or see. This war is being waged against very underdeveloped societies; it destroys their social cohesiveness, radicalizes them and virtually forces them to react.

Our advanced societies are waging a relentless war against tribes. The result is even more violence — it destabilizes the affected nations. That can be best seen in the example of Pakistan. The more the war in the border regions was intensified, the tougher the reactions became. The Pakistani Taliban became stronger with the start of the drone war. Today it is a threat to the nation [Pakistan]. All told, hatred for the West is growing in Pakistan.

Akbar Ahmed knows tribal societies. He worked as a political official in the border area of Afghanistan. He has knowledge of their underdevelopment, as well as their pride and iron will to defend their own identity. And he refers to something else: Osama bin Laden was also a tribal warrior.

*Editor’s Note: The full title of Ahmed’s book is “The Thistle and the Drone: How America’s War on Terror Became a Global War on Tribal Islam.”