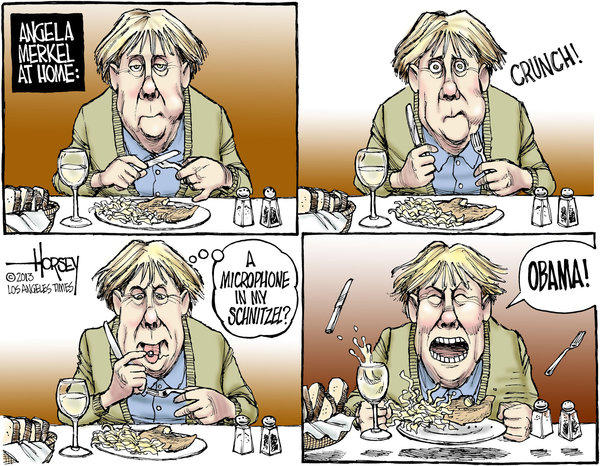 One doesn’t spy on allies like they were drug lords in Colombia. The eavesdropping operation on the chancellor’s cell phone also shows that the Obama administration has lost all sense of proportion in the war on terror.

Defense Minister de Maizière is not the only German politician who reckoned that his cell phone was being wiretapped by foreign services — and who kept it brief on the telephone. But everyone always thought of Russian or Chinese eavesdropping operations. Hardly anyone anticipated that it might be the Americans who were sneaking into the line, on top of that into the chancellor’s. That is — Merkel would not have protested to Obama without proof — an unparalleled affront. It leaves behind considerable damage not only to German-American relations, but also to the relationship of the entire EU with the Americans and in NATO. One does not spy on allies as if they were drug lords in Colombia, above all not governments that did not want to make an issue of the National Security Agency (NSA) scandal.

Now, however, the chancellor has found out firsthand that the Obama administration has lost all sense of proportion in its war on transnational terrorism and quite apparently cannot distinguish between friend and foe. Washington is already snubbing a fourth country with its wiretapping practice. The chancellor and her cabinet are standing there twice duped — like gullible people who were possibly even monitored when they assured one another that the Americans would never do that.

Europe Must Prove It Knows How To Protect Its Citizens’ Rights

In August, Minister of the Chancellery Pofalla declared the NSA affair ended. On the other side of the Atlantic they must have really laughed that directional microphones were no longer needed for surveillance. The questions Berlin posed to Washington were still not satisfactorily answered. Obama apparently doesn’t care whose feet his services trample on and what domestic consequences the mistreated are in for. The only other explanation would be that he no longer has his spies under control, which doesn’t make the matter any better.