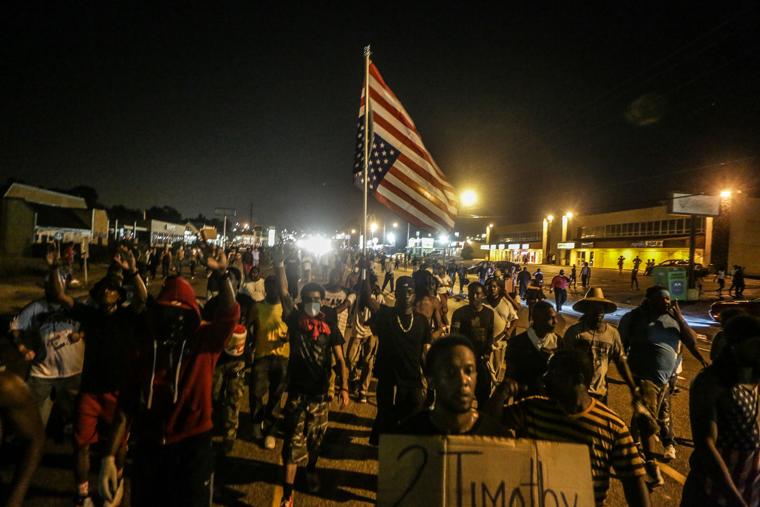 The unrest after the shooting of black teenager Michael Brown highlights the social, political and economic problems of suburban America.

Cranfield Drive in Ferguson looks like many suburban streets in America. Single-story, uniform houses with mowed lawns alternate with newer, two-story social housing. It is clean and quiet. If a teenager called Michael Brown hadn't bled to death in the middle of the street here two weeks ago, Cranfield Drive wouldn't be worthy of mention.

But Michael Brown's death, from six bullets from a policeman's service weapon, has quickly brought this place to the center of the world's attention. Since then, much has been written and said about the hostility of the almost exclusively white local police toward the population, which is nearly two-thirds black.

But the fact that Ferguson is not an isolated case is being overlooked. In reality, this community of around 21,000 inhabitants, sandwiched between the international airport of St. Louis and several highways, illustrates all the problems with which America's suburbs have been struggling since the start of the financial crisis six years ago. "Suburbia," the embodiment since the 1950s of dormitory towns created on the drawing board for the working middle classes, where there is lots of space for cars and giant malls, but no public transport or shops within walking distance, is in deep crisis. 16.5 million of America's poor now live in the suburbs and 13.5 million in cities; the classic distribution of poverty since the end of World War II reversed during the 2000s.

Elizabeth Kneebone of the Brookings Institution in Washington has been investigating the plight of the suburbs for years. After the death of Michael Brown, she took a closer look at Ferguson. Her findings are sobering. Since the year 2000, the poverty rate in Ferguson has doubled (a family of four is poor, according to the government's definition, when it has less than around $23,000 per year). In every statistically recorded area of the city, one in four residents today is poor. At the start of the 2000s, there were lots of poor people here, but not everywhere. The poverty rate at that time was between 4 and 16 percent.

Unemployment has also risen. At the beginning of the century, only around 5 percent of the citizens of Ferguson did not have a job. Today it is more than 13 percent. And it is not just the poor: Everyone in Ferguson today has it worse, in comparison to the rest of the state of Missouri, than they did before. Median income here was around $37,500 in 2012 — the average for all of Missouri was $47,300. In the year 2000 it was the same.

One of these poor is David. The 34-year-old married father of two mows the grass at a private school. For this he earns around $1,600 per month. "They like me there, but I don't know if I will still have the job when all this here is over," David told the Presse am Sonntag, right next to the place where Michael Brown died. Since then, he has been almost continuously on the streets demonstrating for peace and justice. "Cranfield is a poor area, but it was peaceful before Mike Brown was shot dead," he says. "We have to learn to respect each other. I don't want the police to love me. But they should respect me."

David's story is symptomatic of the problems of African-American men in the labor market. The trained electrician from Prince George's County in Maryland got into a fight when he was a young man and was sentenced to 18 years in prison. "That was the biggest mistake of my life, I regret it every day," he says. After six years and eight months, he was let out for good conduct. But if you have a criminal record in America, you have no hope of getting a job. "I have a record in Prince George's County. They will never forgive me there." So he moved to Arizona to start again. He bought a house, but the housing crash made his mortgage unaffordable. "So I moved to Missouri because I heard there was work there. I wanted a fresh start." There is indeed a strong industry around St. Louis. Boeing has a big factory here and there are lots of suppliers. But when David applied for a job as an electrician, he was told that he had good work experience but that he had to present all of his high school reports. They went missing in Maryland. End of story.

"That has a lot to do with the schools," says Herc Harris, while he separates enormous pork ribs with a hatchet. "When they close a school, they don't do it so they can rebuild it. It stays closed. They want us blacks to stay second-class citizens." Harris, 50, runs the barbeque restaurant Red's BBQ, which is a few minutes' walk from where Michael Brown died. He is very angry about the image of the work-shy black scrounger that a lot of whites have. "The taxpayers here in Ferguson pay their taxes. But if you are born in social housing, don't get a decent job, and are always harassed by the police, eventually you just get tired."

That is something that you hear a lot of people say in Ferguson at the moment: They don't want welfare handouts, they want respect. "A load of people don't want to live off food stamps and rent subsidies, they want to live off their jobs," says David. "But the truth is that if I didn't get food stamps, I would have to choose between buying something to eat or paying my bills. You can't do both."

African-Americans' anger is directed at the white establishment in the community's political bodies, but so far it is not a political anger. Ferguson may be two-thirds black, but five of the six city councilors, the mayor and the police chief are white. The white business owners and manufacturers are organized in associations who nominate candidates for every local election and make sure that lots of their supporters vote. In turn, the white elected city officials make sure that public contracts go to members of the white associations — while of course avoiding any semblance of racial discrimination, which is illegal.

The city's blacks so far have not constructed any comparable political machine. In last year’s election, for example, from the electoral district where the most African-Americans live, only 2 percent of people voted.

This political indifference in spite of problems that can be solved politically is due to the fact that most blacks in Ferguson are newcomers. In 1990, less than a quarter of the citizens here were black. Today it is more than two-thirds. Ferguson is typical of American suburbs in that since the 1990s it has attracted African-Americans who wanted to get away from run-down slums in the cities. The result was an extensive urban sprawl, because at the same time rich white families were moving to exclusive gated communities outside of the cities. Consequently, greater St. Louis has almost exactly the same number of inhabitants today as it did 40 years ago. However, they are spread out over a huge area and 15 administrative districts, which stretch to Illinois' southern border. It used to be just four administrative districts. While St. Louis had approximately 350,000 inhabitants at the last census in 2010 (8 percent less than 10 years previously), St. Charles County, which is outside the city boundaries, has grown by 27 percent and is larger than St. Louis, with its 360,000 people.

All this means that without a car, you have hardly any chance of finding a job. The area of greater St. Louis tops the statistics of places with the longest daily commutes. It also means that social security benefits, schools and help looking for work would involve a lot of effort and expense, even if the white political class was interested in alleviating black poverty.

A lot of young black men are in need of this support, explains social worker Jahad Khayyam from the organization Better Family Life. "A lot don't know what it means to be a worker in the 21st century. It starts with punctuality, conflict resolution and how you dress."

It is not from their fathers that the young blacks of Ferguson are learning these virtues, says Khayyam, while a group of young men on the other side of the street is smoking cannabis. "85 percent of households here are headed by single mothers. Our families are broken."