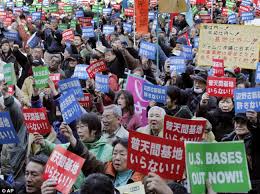 Thirty-nine hundred people gathered on the shore of Sedake. Their expressions overflowed with anger toward the two governments that have ignored the will of the people and their steadfast determination to protect the rich seas.

Elected Diet members, prefectural assemblies and the “Committee to Stop Construction of a New Base in Henoko,” which comprises citizens’ groups, organized a protest in the district of Sedake, which is located in Nago City alongside Henoko.

The sandy beach chosen as the meeting place commanded a front-row view of Oura Bay. The sea was calm and beautiful, yet the scene was a strange one; a float, denoting a “no entry” sign into a temporarily restricted area, had been stretched around as if to surround the bay.

Atop the water, a group of protesters on canoes, and the Japan Coast Guard continued to glare at one another. This very spot was, at the moment, where the Japanese and American governments have isolated Okinawa’s seas from its own citizens.

Vice Governor Mitsuo Ageta attended the assembly, representing Okinawa Governor Takeshi Onaga as the head of the prefecture. “The time will soon come for Governor Onaga to make his biggest decision and choice,” said Ageta to an audience whose spirits rose at his words.

We will not allow a new base to be constructed. The shore of Sedake was enveloped by a sense of unity born from the governor’s strong determination and the citizens’ unshakable will.

Hirokazu Nakaima, the previous governor of Okinawa, said the following in a 2011 magazine interview: “Even if, for example, I say I will use my power as governor to reclaim the land and give permission for the base, there is no way it can be constructed if the citizens all oppose it together. I do not understand the meaning in the two governments deciding by themselves what cannot be done.”

The country and the American military have an unconcerned attitude about the base construction, which is an inexcusable act. When Nakaima reclaimed the land for Henoko, it was on the condition of establishing an environmental conservation committee to protect the surroundings. However, this committee does not seem to serve any function.

The minutes of a committee meeting were released to the public nine months after it occurred. It was also revealed that there were falsifications in the documents. The materials distributed to the committee clearly stated that there would be three temporary piers and wharves, but when these documents were shown to the public, the number was rewritten as one.

In addition, Seiji Azuma, vice chairman of this same committee and emeritus professor at the University of the Ryukyus, has announced his intention to resign. “I have concluded that it is meaningless for the committee to be endorsed by a specialist,” he explained.

The American military did not allow an investigation into a temporarily restricted location where coral was suspected to have been damaged. Yet on the other hand, the Okinawa Defense Bureau was clearly conducting deep-sea research in the same part of the ward. The double standard here is obvious. These makeshift techniques prove how unreasonable this plan was from the very beginning.

Prime Minister Abe has stated again and again that “The relocation to Henoko is the only option,” but his words are filled only with deceit. There is no such thing as a policy without options. It’s time the Japanese and American governments consider an option besides Henoko.

Should they force this issue any further, they will only heighten and spread the destruction. They will destroy the rich biodiversity of Oura Bay, and the unity of the citizens who have come to protect the growth of the land. This will no doubt invite instability in Japan-U.S. relations and become a liability in the end. Both governments should hurry and recognize this.