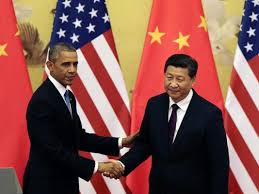 History: to avoid falling into the Thucydides trap of conflicts between a ruling power and a rising power, as well as other forms of tragedy involving great power politics;

Reality: to promote solutions for international and regional central issues, to safeguard effective functioning of current international systems; and

In his upcoming visit to the U.S., Chinese President Xi Jinping will innovatively use dialectics at this juncture in the development of China-U.S. relations to reflect the three previously described factors.

Dialectic One: to resolve conflicts with cooperation. While the U.S. repeatedly accuses China over issues of cybersecurity, the Chinese, in the spirit of mutual respect, equality and mutual benefit, express a willingness to cooperate with the U.S. in order to promote cooperation for combating cybercrime and cyberterrorism, protecting against third-party cyberattacks, and establishing international rules for cyberspace. Cooperation on cybersecurity will very likely become the highlight of President Xi’s U.S. visit.

Dialectic Two: to control disagreement through cooperation. The South China Sea is a central issue of relatively significant disagreement between China and the U.S., and has remained heated since the U.S. pivoted to Asia. However, China and the U.S. are pushing for talks on the Code of Conduct for the South China Sea in order to work together on crisis prevention at sea, communication with surface combatants, and avoiding misjudgment, so as to have relatively effective control over their disagreement.

In short, turning troubles and challenges into opportunities for cooperation, and constantly developing examples such as that on anti-corruption, will become the new normal for China-U.S. relations. Xi’s strategy toward the U.S. fully utilizes this dialectic, pushing China-U.S. relations forward, which can be summed up in this trilogy:

First is the foundation. The discussion on the U.S.-China Investment Treaty has motivated Chinese capital to migrate into several constituencies in the U.S., allowing the economic relations between both sides to deepen and become more holistic, consolidating their socioeconomic basis, and improving Capitol Hill’s opinion on China. Emphasizing the importance of the states and districts in the U.S. is Xi’s brilliant accomplishment. Seattle will be the first stop on his U.S. visit, where he will meet with local politicians, and attend the U.S.-China Governors’ Forum and the U.S.-China Entrepreneurs Forum, fully demonstrating the cohesiveness of Chinese citizens with those overseas and resuming his role as a charismatic diplomat from his visit to Iowa as the vice president of China.

Second is moderation. The key to new international relations between the two great powers of China and the U.S. is one characterized by 21st century win-win cooperation, realizing the “no conflict, no confrontation, mutual respect, and win-win cooperation” between the two countries, effectively controlling the strategic drift of China and the U.S., and pursuing the best while [purposely] avoiding the best [in order to maintain relations]. Moderation is the key.

Xi’s historic upcoming visit to the U.S. will provide a rare glimpse into the dialectics for China-U.S. relations, and an understanding of the three factors responsible for it. Countries around the world look forward to the successful completion of the visit.