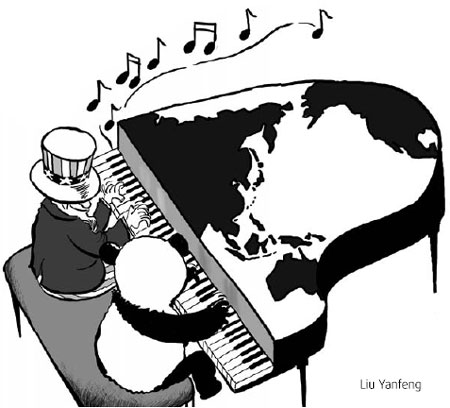 Both the U.S. and China must seize the opportunity to show the whole world that both countries have the desire and the ability to work together for common progress.

Since the U.S. and China have started to reach a common understanding to establish a new model of major power relations, both sides have been expanding their pragmatic collaboration and effectively controlling their differences, and have already achieved a series of initial results. The structure of international relations and the present Asia-Pacific situation are both currently undergoing profound and complex changes; America and China themselves are also entering another crucial stage of change and development. In these new circumstances, both sides need to seize the valuable opportunity of President Xi Jinping’s state visit to America to demonstrate to the whole world that both the U.S. and China have the desire and ability to work together for common progress. They need to show the world that they can assist and not undermine one another, that they can show tolerance toward each other rather than dismiss each other, and cooperate without being overly conceited. They will then be able to pour new strength into this new model of major power relations between the two countries, use their commonalities to safeguard the stability of the 21st century’s international order and provide important support for consistent progress.

Strengthening the cooperation and harmony between the large economic systems of America and China will provide a “twin engine” for the safeguarding of an expanding, open and overall beneficial international economic system. The fragility and divided nature of the weak global economic recovery since the eruption of the 2008 financial crisis is evident today, and the weaknesses in many governance systems around the world are just as severe as before. The negotiation of policies in each large economic system should not contradict those of others, because this will certainly further exacerbate risks to the global economy. Being the two largest economic systems in the world, and accounting for over one-third of the total global economy, both the U.S. and China are resisting the spread of the financial crisis, are driving forward worldwide economic recovery, are working together to improve worldwide economic governance systems, etc., and have already achieved significant results. America and China now need to assist one another; they need to overcome domestic resistance to the two countries’ cooperation in order to accelerate the pace of economic transformation in both countries. They need to accelerate the expansion of international collaborative production capabilities in order to promote cost-effective and sustainable demand; they need to promote openness and the general benefits of global multilateral trade investment systems; they need to proactively iron out systematic risks within international financial systems; and they need to promote general reform and development within the architecture of global economic governance.

The great strategic powers of both the U.S. and China can enhance tolerance and mutual trust, will establish harmony, stability and effective scaffolding for international security, and above all, establish a foundation for security in the Asia-Pacific region. There is currently a mixture of both new and old security threats and challenges, a state of "competition-cooperation" within the realms of international security, and countries are dependent on each other to keep in step with any escalations. However, regarding zero-sum games: Resistance to the idea of a military alliance for security is still high. It also needs pointing out that collaboration within the clique of those with a Cold War mentality and those who discriminate against those who hold different world views will not only aggravate suspicion and cause difficult security situations between countries, but will also restrict the development of each country’s cooperation on security issues, as well as restrict the potential for large-scale responses to increasingly severe and complicated security challenges. The U.S. and China ought to develop new ways of thinking, and sort out the bottleneck situation of cooperating in militarily secured territories. They should think of “relative safety” rather than “absolute safety” to define their respective security aims, think of “joint security” rather than “unilateral security” to define the security interests of both sides, think of “collaborative security” rather than “zero-sum confrontation” to plan a way to safeguard regional and international security, and drive forward order in the Asia-Pacific region as well as internationally, favoring even more harmony, stability and effective development of situations.

The strengthening of cooperation and innovation between the two great powers of the U.S. and China will provide higher quality and more effective public measures for governance throughout the whole world. On the one hand, along with continually increasing the range and depth of governance, [cooperation] will strengthen international society’s awareness of the benefits and responsibilities at the foundation of globalization. On the other hand, other aspects such as the global commons — the oceans, the Internet, space, the polar regions, etc. — not only further reveal the complexities of worldwide governance and the asymmetry of "competition-cooperation," they also intensify the necessity of highly effective, impartial governance, and the problems within the inadequate present global governance provisions. The U.S. and China are the two great, crucial variables affecting global governance architecture. U.S.-Chinese collaboration can not only provide the world with a great amount of material public goods, but is also able to fully develop both countries’ most complimentary traits, and the adoption of innovative governance ideas and methods. The sustainable development of mankind is confronted with significant threats and challenges, including finding a common response to the issues of climate change, energy resource safety, water, soil, food safety, etc., and common progress in establishing order, regulation and effective governance throughout the world is tantamount.