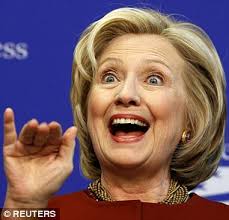 I called her America’s Tin Woman. That was in April, when she had just announced her candidacy. At the beginning of next year, she will be the Democratic Party’s candidate for the presidency of the United States.

Inside her party, she has no competition. Unfortunately, I can’t find a Republican who could stand up to her.

Backed by Bill Clinton’s charisma, this bitter woman, visibly exasperated that she has to put on a daily smile, who lacks vision and whose only great quality is her inflated ambition, and who has lived obsessive-compulsively, will become America’s next president. She is her only obstacle – if she doesn’t break (considering she is 68 years old and suffered a stroke), and if she doesn’t implode, she will return to the White House, which she left as a humiliated and irritated first lady, memorably saying “I’m not going to have some reporters pawing through our papers. We are the president!”*

As senator, she had only one notable initiative, for which she is still apologizing – she enthusiastically approved the invasion of Iraq.

Her performance as secretary of state was downright pitiful; it’s not about the serious mistakes of Obama’s politics, it’s about her own, of which at least one is of a criminal nature — the confusion that led to the terrorist attack in Benghazi, where the American ambassador in Libya, as well as three other officials, were killed.

In the Middle East, her heartfelt ignorance, unconditionally serving Israel, managed to annoy even the Jews.

Since Bill Clinton has proven to be a very good fundraiser, here she is, standing on top of a pile of money, looking down at the electorate. In the first three and a half months since she announced her candidacy, she collected $47 million toward a total of $2.5 billion, which is the estimated cost of the entire campaign.

So, what is it that this woman — disconnected from reality, incapable of empathizing with anyone else but herself — is proposing to her fellow Americans? To sit tight, because good things are coming their way. One political analyst compared her to Dolores Umbridge, the character from Harry Potter: “She knows what’s best for the nation and she’s going to get it into their heads until they agree.”*

*Editor’s note: These quotes, although accurately translated, could not be independently verified.