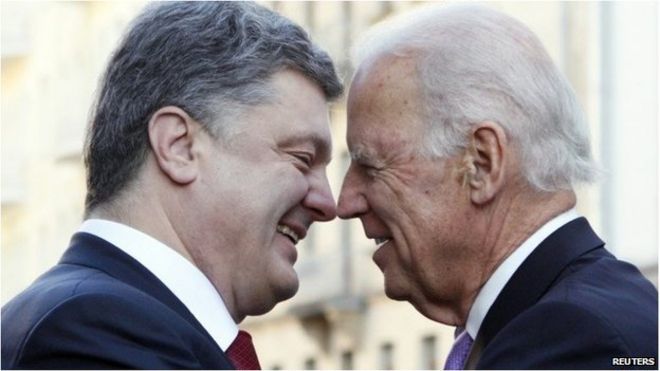 The negotiations between the U.S. vice president and the president of Ukraine on the sidelines of the Davos forum have not demonstrated new twists for accelerating the settlement of the Minsk process.

The four-hour discussion between Poroshenko and Joseph Biden, held in Davos, has created a new wave of rumors and interpretations. Moreover, the vice president of the United States did not comment on the meeting. Therefore, political analysts and experts expressed a lot of conflicting versions and explanations as to what the conversation was about and on what matters they stayed silent.

Here are some of the most popular versions: First, the majority of political analysts believe that the American curator of Ukraine (Biden) prompted Peter Poroshenko on how to best perform the political points of the Minsk Agreement under the given circumstances, and how to launch a constitutional reform while avoiding a significant loss of image.

Second, no one doubts that one topic of discussion was the process for granting the loan to Kiev. The discrepancies here are only in the terms of lending.

Third, the question of action coordination between the U.S. and the Ukraine stands distinctively in the process of launching the project “Nord Stream 2.”*

Should Ukraine Be Worried About the Nord Stream?

The Ukrainian president, commenting on the meeting with Biden, underlined that they have agreed to join forces against Nord Stream 2.

“It was clearly stated that the project," Nord Stream 2, "is purely political, aimed against the Ukraine and against a significant number of European Union countries, and we will act effectively to stop him," stated Poroshenko.

Some experts are skeptical that Washington and Kiev will be able to stop the project, which is almost at the stage of implementation.

Kiev has something to worry about. If the project is implemented and the stream works, Ukraine will lose one of its most important sources of income — money for the transit of Russian gas to Europe. Moreover, Kiev will lose its last levers of influence on Moscow, which are already pretty weak. Current talks in Ukraine about doubling the price for gas transit are no longer relevant at all.

As for Washington, it has always had a jealous attitude toward Russia’s energy policy, and never misses a chance to slow down the new projects of Russian oil and gas companies.

Although, according to experts, this exact part of the conversation stayed silent on this matter. As the political scientist Vladimir Kornilov stated, the vice president of the United States has his own views on cooperation with Ukraine. Experts remind us that at the end of the term of his vice presidency (next year), Biden intends to start a business career that will be largely related to energy projects.

Even before the forum in Davos started, Ukrainian political analysts all agreed that the most relevant issue — during a time of worsening crisis in Kiev — was getting the third tranche from the International Monetary Fund. And here, apparently, there was almost no controversy.

At least, today Poroshenko said that Ukraine expects to receive the third tranche from the IMF in February. It is a billion dollar loan, under the guarantee of the United States. The reaction of the Ukrainian mass media was not difficult to predict — discussion about various arguments over the conditions of the allocation of this money immediately became the main theme. One of the key arguments is about political personnel. In certain publications, there was information that Poroshenko got a peculiar ultimatum in Davos. Supposedly, Washington demanded the resignation of Attorney General Victor Shokin, and is ready to allocate the $1 billion only after the signing of a relevant decree. According to the tone of the publications, Ukrainian pro-government media tend to present this information as truthful.

However, the experts that were interviewed by Aktualnye Kommentarii could not hide the irony. Ex-deputy of the Verkhovna Rada, Elena Bondarenko, said, "Shokin is not worth a billion. I think that someone from Skokin’s surroundings is bidding his price up."**

Perhaps the reason for this was Biden's comment saying that one of the conditions for obtaining a loan guarantee for Ukraine is the progress of investigations and prosecutions of corruption in the country.

'Minsk 2' in a Davos Format

“The Americans, in this situation, are trying to influence Russia and seeking compromises. Biden is likely interested in whether there is a chance for productive voting in Verkhovna Rada on the constitutional bill on decentralization. Perhaps, the parties discussed their actions in the case of acceptance or non-acceptance of the project in the Ukrainian parliament,” said the director of the Center for Applied Political Studies Penta, Vladimir Fesenko.***

Sources of Aktyalnye Kommentarii in Kiev claim that Washington is especially dissatisfied with the lack of clarity on the voting situation on the constitutional amendments outlined in Parliament for next week. This vote could fall through at any moment.

As previously written in Aktyalnye Kommentarii, a week before the fundamentally important vote it became clear that the coalition does not have the 300 votes in Verkhovna Rada that are needed to support a constitutional reform. In Kiev, there are several scenarios that will still lead to the same result, which is that “Verkhovna Rada is not going to adopt amendments in January." This scenario does not suit Washington because in this case Moscow can accuse Kiev of disrupting the Minsk Agreement.

However, other experts point out that although, as a result of negotiations, Poroshenko received clear guidance from Biden on all the important points of the Minsk Agreement, the Ukrainian president is still unlikely to perform certain tasks.

"The only actual benefit of this conversation could be that the two parties exchanged their real views on the process of realizing constitutional reform in Ukraine. This means that, on the one hand, Biden had to explain to the Ukrainian president that the reform process is necessary, and the leader of Ukraine had to explain to Biden that he physically cannot do it,” Rostislav Ishchenko, president of the Center for Systems Analysis and Forecasting said to Aktyalnye Kommentarii.

A similar opinion was expressed by Elena Bondarenko, who said, “Based on what is happening inside the parliament, we can conclude that the president is so weak and has so little influence on the situation that he not only cannot provide the voting even in his own faction, but he also can’t collect 300 votes.”

Elena Bondarenko believes that in this lies the danger for him, because no one needs a weak president, including the United States. In this scenario, “[the U.S.] will look for someone who is more active to achieve their goals,” she added.

But there is also another point of view. Some analysts do not exclude the possibility that Poroshenko is just over-bidding a little bit.

"Now different parties are making efforts to ensure that the political process will move forward. Only progress in the political sphere will create reliable and long-term conditions for a de-escalation of the conflict. Moscow and Washington and Brussels understand this. In this situation, Poroshenko is bargaining for the best concessions that Kiev will get this year,” said the deputy director of the Center for Current Politics, Oleg Ignatov.****

It needs to be recalled that the year 2016 began with a positive message for all the participants of the Minsk process.

The efforts of the international community to accelerate the implementation of the Minsk Agreement cannot be ignored. Telephone talks in the "norman format" have already been held. German Chancellor Angela Merkel made a number of statements. French President Francois Hollande called to accelerate implementation of the Minsk Agreement. Russia and Washington began to directly discuss the Ukrainian crisis. Earlier, the following meetings had been held: Vladislav Surkov with Victoria Nuland, and Sergei Lavrov with John Kerry.*****

While Kiev has managed to maintain a pause, the Donbass states that Kiev’s representatives still have not tried to contact the group or conduct any meaningful dialogue.

The head of the People's Republic of Donetsk, Alexander Zakharchenko, said at a press conference today that since the negotiation of amendments to the constitution has not happened, any change of the fundamental document should be considered an exclusively internal affair of Ukraine. In this case, Zakharchenko proposed that Kiev "centrally disperse, as it did the Czech Republic and Slovakia.”

“The United States rather abruptly changed its attitude toward the Minsk Agreement and all their policy toward the Ukrainian government. Naturally, they do not want to draw special attention to this. They want to save face and to reach a compromise with the least cost to themselves,” said Rostislav Ishchenko.

Perhaps the position of the White House can be explained by President Obama's intention to finish his presidential term on a positive note. Obama wants to "razrulit" key conflicts, which in this case, means Syria first of all and not Ukraine.****** This version can be proven by Western media reports that say Washington is only half a step from ground operations in Iraq and Syria.

But even with all this pragmatism, a rapprochement between Kiev and Russia should not be expected in the coming years. “The U.S. will continue to support Kiev because Washington has no other choice. The situation is that neither Brussels nor Washington can change their bets and refuse to support Ukraine. But that does not cancel the fact that the United States can exert pressure on Kiev on the issues that they classify as fundamental," said Oleg Ignatov.

*Translator's Note: Nord Stream 2 will be a twin pipeline system that can transport natural gas from the world's largest reserves in Northern Russia to supply homes and businesses across Europe.

** Translator’s Note: Verkhovna Rada is the unicameral parliament of Ukraine.

*** Translator’s Note: The Center for Applied Political Studies Penta is a non-profit think tank that provides consulting and analytical services, and carries out applied research on domestic and international politics, electoral processes, and the socio-economic development of Ukraine.

**** Translator’s Note: The Center for Current Politics is a quality information provider with 11 years experience in analysis of the current political and economic situation in more than 19 Russian industries.

***** Translator’s Note: Vladislav Surkov is a Russian businessman and politician of Chechen descent.