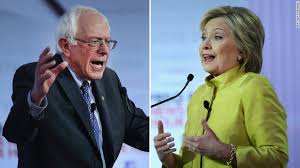 In the televised Democratic debate, Clinton presents herself as an experienced politician: “They are voting not only for the president, they are voting for the commander-in-chief.” The ex-secretary of state is moving quite close to President Obama; she needs a victory in South Carolina where many African-Americans live.

Her rival Bernie Sanders promises blacks and Latinos that they will especially benefit from his “political revolution.”

It is a question that had to come up: “In New Hampshire, 55 percent of women voters supported and voted for Sen. Sanders. What are women missing about you?” Hillary Clinton is prepared and says, “I have spent my entire adult life working toward making sure that women are empowered to make their own choices, even if that choice is not to vote for me.”

After that, the former secretary of state emphasized that she is not asking Americans for their vote because she is a woman, but rather because they should decide upon “the most qualified, experienced, and ready person to be the president and the commander-in-chief.” And because PBS journalists Gwen Ifill and Judy Woodruff are moderating the discussion, Clinton’s remark is very fitting: “We've had like 200 presidential primary debates, and this is the first time there have been a majority of women on the stage.”

Two days after what CNN dubbed “the earthquake of New Hampshire” (Sanders received 60 percent of the vote), Clinton sounds controlled and focused in Milwaukee. Unlike the last battle of words, she is no longer accusing the senator of an “artful smear campaign,” but is instead quietly acting the experienced political realist.

“I am not a single-issue candidate, and I do not believe we live in a single-issue country,” Clinton said. She knows that as the spouse of an ex-president, she cannot embody the anger that many Americans have for the Wall Street banks and the influence of major financial contributors to U.S. politics nearly as well as Sanders. But she is campaigning tenaciously using her experience and detailed knowledge, and is trying to tie herself quite closely to President Obama.

That is strategically smart. After all, 90 percent of Democratic voters approve of Obama. In addition, many Latinos and African-Americans live in the states where the next primaries will take place: Nevada (Feb. 20) and South Carolina (Feb. 27). Clinton taunts Sanders again and again that the self-proclaimed “democratic socialist” has criticized the first black president many times in the past – whereas Obama trusted her judgment and named her secretary of state. Sanders’ statement that the relationship between whites and blacks would greatly improve under his presidency is rather bold. It may be repeated constantly in the coming days and be interpreted as an attack on Obama.

That is because Sanders has also adjusted his message a little. He promises to reduce the high number of minimum sentences which land many blacks in jail. He emphasizes that it is precisely the non-white population which would profit from a higher minimum wage and free college education. The 74-year-old still likes to talk most of all about growing social inequality and the fact that he accepts no contributions from corporations.

At the moment, this appears to be the case: After the first two primaries, Sanders has established himself as a candidate to be taken seriously; however, he must still introduce himself to a majority of Americans. He still doesn’t need to disclose all the details of his campaign and in matters of foreign policy, can primarily refer to the fact that unlike Clinton, he voted against the Iraq War in 2002. The topic still riles up many among the Democratic base, yet the former secretary of state is right when she says, “I do not believe a vote in 2002 is a plan to defeat ISIS in 2016.”

Clinton reminds viewers that they are not only electing a president, but also a commander-in-chief. Nevertheless, national security was the topic for discussion only after 10:00 pm (many viewers may have already tuned out) and Sanders knew how to keep the liberal base happy by sharply criticizing former Secretary of State Henry Kissinger. “I am proud to say that Henry Kissinger is not my friend,” Sanders said.

More 'We' Than 'I' from the One-Time Favorite

Two points are striking: The 68-year-old Clinton speaks on the one hand about the many white Americans who are not doing well (“Coal miners and their families who helped turn on the lights and power our factories for generations are now wondering, has our country forgotten us?”) and who in great part are no longer voting for Democrats but for Donald Trump instead. On the other hand, she makes a noticeable effort to say “I” less often and de-emphasize her own accomplishments and instead makes an effort to appeal more to the “we” sentiment. The implication is that Clinton will change her message and adjust according to the current mood of protest.

All in all, the debate has proceeded objectively for the most part and in line with the recognized contrast between Bernie “Political Revolution” Sanders and Hillary “Slow Progress” Clinton. Both agree on many points, namely that Muslims in the U.S. should not be demonized and that every Republican candidate will destroy Obama’s legacy. Sanders must, however, take care that he does not appear too presumptuous in his criticism of his opponent. “People aren't dumb,” he has said.

Yet Sanders got a few laughs when he stated that which many thought impossible a few months ago: Clinton cannot be sure of the nomination – and she is “not in the White House yet.”