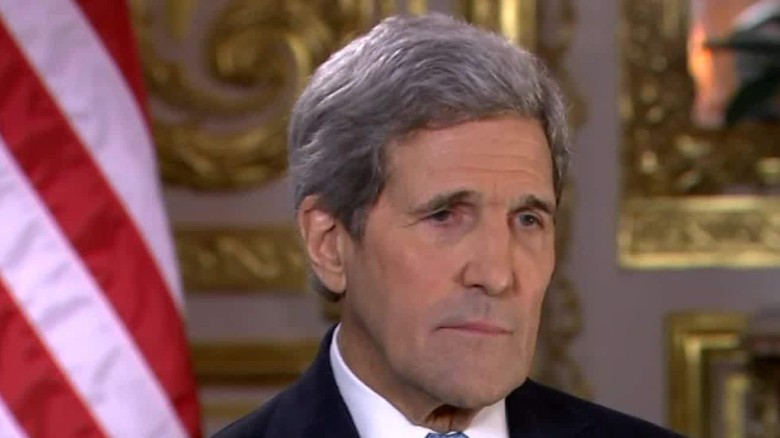 Since the United States has overseen the Israeli-Palestinian peace negotiations they have not made any progress or achieved any notable success. On the contrary, American propaganda has led the negotiations to a dead end because of the complete bias for Israel and its schemes aimed at rejecting peace, continuing its policies of settlement, seizing land, “Judaizing” Jerusalem, and countless other practices and abuses.

When the United States felt its sponsorship of the negotiations — which it monopolized — was threatened by the proposals put forth by the French foreign minister shortly before his retirement, the American secretary of state hastened to the region so that matters would not slip out of American hands and the international community would not force Israel to end its occupation of Palestinian lands according to a fixed timetable, thus paving the way for the establishment of a Palestinian state based on the two-state solution.

We believe that Kerry — who met separately with President Mahmoud Abbas and Jordanian representatives yesterday in Amman — did not present anything new regarding the negotiations and the two-state solution. Instead, he came to obstruct the French proposals before they crystallized into an international initiative submitted to the United Nations Security Council for ratification, especially since the right-wing, extreme government in Israel rejected these ideas as part of its repudiation of peace and pursuit of its policies, which destroyed the two-state solution and will bring another agreement to a dead end as before.

The United States is presently occupied with the presidential election and the attempts of the competing parties to win over the Zionist lobby in America, which guarantees each party the votes of American Jews and their support in the presidential campaigns. The United States is also occupied with the fierce, resolute Russian intervention in Syria and the disarray of the plans of America and its allies in the region. The United States fears the return of Russian supremacy in the region, as well as the conditions in the Arab world in general. This also spurred Kerry to visit the region to prevent the loss of even a little bit of Washington’s influence in the Middle East, generally, and the Arab world, in particular. However, the American secretary of state did not bring anything new; rather, he came in order to give Israel more time to implement its policies against peace and the rights of the Palestinian people: returning home, self-determination, and establishing an independent state with its capital in Jerusalem.

If the United States wanted to do anything to achieve the two-state solution, it could have done it during the seven years President Obama has been in the White House, not during the few months before he leaves office. Kerry’s tour is hopeless. Our people, our forces, and our leaders will continue to struggle until we achieve our legitimate national goals.

*Editor’s note: P5 + 1 refers to the group of five nations (P5) that are permanent members of the U.N. Security Council, including the United States, United Kingdom, France, China, and Russia, plus Germany.