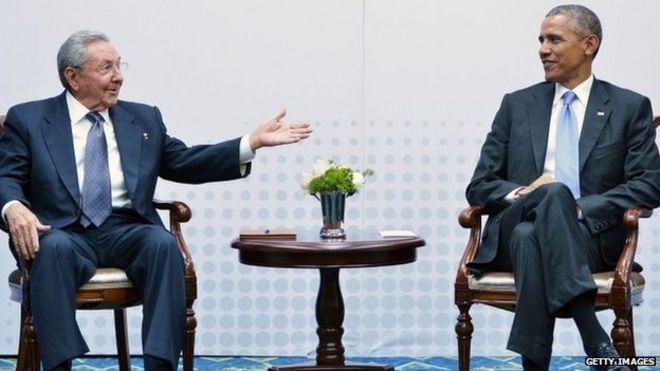 A Latin American sojourn has punctuated the presidential swan songs of both Ma Ying-jeou and Barack Obama. Although different in that the former's tour of the region was a largely ceremonial affair undertaken to buttress diplomatic ties while the latter has gone to cut the ribbon of rapprochement between the United States and Cuba, both will have tasted the mixed sweetness and bitterness of their final travels in an official capacity as heads of state.

Although Obama's diplomatic trophy case remains somewhat sparse, his successful reconciliation with Cuba will necessarily cement his place in history even beyond the distinction of being the first African-American president of the United States. At the end of 2014, Obama and Cuban President Raul Castro together announced that their two governments would begin talks to normalize relations. Immediately thereafter, the United States relaxed restrictions on travel, remittances, agricultural exports and other forms of exchange with Cuba, and relations were officially restored in July of last year.

Obama's visit to Cuba is significant in two respects: first, it serves as evidence that the U.S. policy of restricting trade with Cuba for the better part of half a century has been misguided, and that the new policy of engagement is more in line with the interests of both Americans and Cubans; and second, it shows that peaceful and amicable relations are a boon to regional stability and progress, as well as the collective quest for political and economic integration in Latin America.

The U.S. president is leading a delegation of more than 30 business executives and 20 members of Congress on his trip to Cuba in part to open up the market for U.S. industry, as the United States has already lost the competitive edge on the island. However, any upticks in Cuba's economic activity will be blunted by the ongoing U.S. economic embargo, which was signed into law by Bill Clinton as a move that would remove several obstacles to his reelection, but in the process also made the removal of sanctions a matter that no longer fell within the presidential purview. With the Republican Party currently holding a majority of seats in Congress and the imminent onset of a pivotal general election, it will be some time yet before the embargo is lifted.

In recent years, Cuba's active stance on economic reforms has made it an alluring market for many transnational companies. The most notable transformation has been in the steadily increasing number of private enterprises operating within Cuba, with the private sector accounting for 40 percent of utilized labor, and the Airbnb website alone containing more than 2,000 listings for lodgings throughout the country. The Cuban government has also abolished exit permit requirements, and there has since been a continuous stream of Cuban nationals making excursions to countries all over Europe and the Americas.

Through these means, Cuba and the United States have made their amends, already attracting a multitude of U.S. firms such as Starwood Hotels to invest in the island. The rapprochement is likely to further stimulate other industries, especially tourism, and create a swell of activity that will contribute to Cuban citizens' sense of national identity.

So it has been that Presidents Obama and Raul Castro, through the intermediary of the pope, have successfully restored relations on the basis of mutually beneficial consensus. Although differences of opinion yet remain between the two states such as on the issues of human rights or the embargo, these will not be enough to arrest the momentum of what has already begun. And as we reflect upon the current state of cross-strait affairs, it is clear that here too, leaders on both sides will need to act with wisdom if the impasse is to be overcome.

The author is an assistant professor at the Chihlee University of Technology.