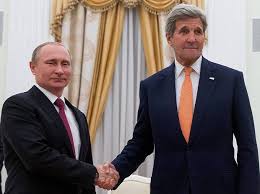 John Kerry came to Moscow not to play guitar or exchange jokes: It is all a sophisticated backdrop that disguises the acute and serious nature of the geopolitical processes that are so painful for the United States.

Putin and Kerry’s four-hour talks were a continuation of a series of diplomatic marathons on the subjects of Donbass and Iran. The Kremlin’s journalist pool is already getting accustomed to losing a good night’s sleep during such meetings, as are most likely their Western colleagues.

Negotiations, a mechanism of resolving global conflicts that has been severely neglected by the Western world, are again, as a result of Moscow’s persistent initiative, being used in international relations.

The custom of pulling out a machine gun at the first sign of a problem, going on rampages in remote regions of the planet in the name of “democratic interests,” condemning “regimes” and designating the innocent and the guilty, is slowly receding into the past.

The United States — granted, with some cries of resistance — is reverting to the need for lengthy political dialogue; largely because, at present, when the U.S. whips out its pistol, it has to remember the other guy’s pistol, too.

Russia is using military force not to crush its opponent, but to compel a ceasefire and the start of negotiations. And countries participating in global politics see this and draw their own conclusions.

Kerry came to Moscow not to play guitar or exchange jokes; this is all a sophisticated backdrop that disguises the acute and serious nature of geopolitical processes that are so painful for the United States.

Following Putin’s unexpected decision to withdraw the airstrike group from Syria, the head of the U.S. State Department was forced to immediately view this move as an invitation to continue and revitalize negotiations started back in mid-2015 – negotiations that were based on rules and procedures established by the Russians.

Following the Russian Air Force’s evident success and the simultaneous withdrawal of the air strike group from Syria by Putin’s order, a narrow corridor of compromise was opened and Americans simply couldn’t avoid entering it.

The diplomatic significance of the Russian Air Force’s successful operation in Syria is arguably much greater than that of the purely military operation, about which much has been said. The U.S. and the groups it controls in Syria have been confronted with an alternative center of power that dictates its own rules.

Russian military forces not only bombed terrorists and helped government military forces grow their fighting capabilities, but also collaborated with various conflict participants. Russia didn’t come to destroy everyone right and left and present itself as the new global police, but as the exact opposite; it came as a conciliatory force that distinguished obvious thugs from those who are entrapped and misled, and helped the latter overcome their antagonism and embark on negotiations.

The successful Chechen experience, with all its particularities, gave Russia the unique tools to resolve the most urgent conflicts complicated by the interplay of outside forces.

Understandably, if Russia had behaved in Syria, in Georgia on Aug. 8, 2008, or in Ukraine while saving the Donbass region in the same way as the United States allowed itself to behave in Yugoslavia, Libya, Afghanistan and elsewhere, the populations of the various nations would have drawn a simple conclusion: Why would we need a new cowboy to replace the old one? Or, more precisely: what advantages does a frenzied bear have over a frenzied cowboy? None.

In reality, thanks to the fact that Russia is not going rogue, but healing wounds and “sewing up” the sovereignty of the country for the benefit of the entire population, it is becoming a major peacekeeping force – in essence, the complete opposite of the United States, and not just when it comes to military power.

Even in Turkey, which is belligerent to us, where anti-Russian rhetoric is especially rampant, there are articles such as the one published in the newspaper Hürriyet on March 18:

“Russia’s biggest victory in Syria is that it strengthened the conviction that it doesn’t at all resemble the United States; it collaborates with legitimate forces and is the country that combats terror rather than creates it.”

The balanced politics of Russia, whose authority rises above the transient and selfish interests of the participants and which, moreover, doesn’t pursue its own selfish goals, allows many countries and regional forces to view, in a new way, our country, the conflict itself and its participation in it, as well as the entire paradigm of international relations.

All of a sudden, a powerful nation has arrived on the scene which is prepared to refrain from using its military force for the purpose of imposing total control and neocolonial dependence on countries and entire regions, but instead wishes to balance interests and establish a multipolar world.

When Moscow merely employed that rhetoric in public addresses, many perceived it as empty promises or even lies that disguised selfish motives. But after its historic operation in Syria, it became clear that this really is the new realpolitik.

The more confidently Russia implements this policy, the more countries will turn to it for help in conflicts, which means that its influence in the international arena will continue to rise.

The Russian Air Force could, at any moment and in just a few weeks’ time, appear and establish military bases in Iraq, Afghanistan and anywhere else, solely upon the request of the official and legally-elected government with the goal of establishing and transitioning toward political resolution.

This has become an unpleasant surprise for Washington, which is not only losing the trust of the international community and its monopoly on implementing force beyond its borders, but is also confronted with a more attractive ideological alternative. Although that alternative is based on a nominally weaker military complex, it is rooted in the good old principle of justice, which more than compensates for its difference in power.

It is shocking that, within Russia’s very borders, there are those who are unhappy with Vladimir Putin’s policies, which they charge with being weak, pliable and lacking follow-through.

Jealous patriots demand the victory of the forces of good and the Russian world here and now, as if Russia were not participating in the most complex geopolitical clash taking place in the margins of a global conflict with far lower resources than its “partners,” but participating instead in a video game with bonuses and a chance to start over in the event of a loss.

That blindness is in sharp contrast to the growing international recognition of the new geopolitical reality established by Russian leadership, which is based on a measured approach in resolving domestic and international conflicts.

It must be understood that it is impossible to resolve political, and what is more, spiritual, conflicts by sheer brute force and military presence, however effective. Ukraine itself may be restored and freed from Western occupation not by tanks in Kiev, but by creating conditions for the main core of the population to reconsider the key tenets that led to Ukraine’s current tragedy.

It would be just as great if Bashar Assad didn’t simply heroically resist terrorists, for which he has already earned the gratitude of his descendants, but also found a wise political solution to draw dissenters to his side, thus undercutting Western anti-Assad propaganda.

All this is extremely difficult, and much more so than shooting mortars from a mortar launcher, but only such a process can extinguish the fire of hatred, chaos and terror being spread all over the world by the United States.