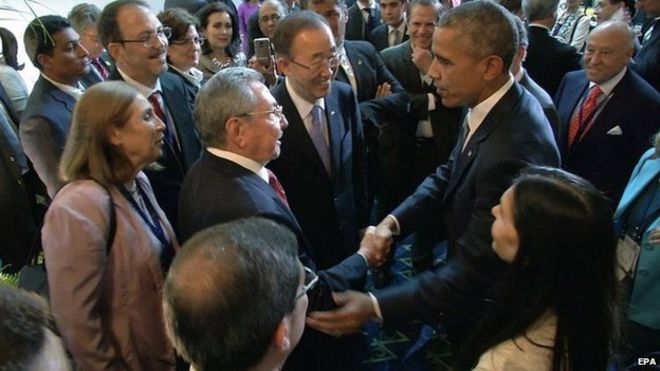 President Obama wants to take the relationship with Latin America back to square one, or at least that part of it involving the “Bolivarians,” who are going through some difficult times right now.

And at the center of this “new deal” is Cuba, an old conflict that has been in the deep freeze. Although an official thaw in relations with Cuba has not yet manifested itself, it appears that a change may be in the works. This is the message of the U.S. president’s recent trip to Cuba and Argentina.

We no doubt have to go along with the hackneyed adjective “historic,” applied to Obama’s trip to Havana. However, I prefer to characterize it as “symbolic” because, although it didn’t produce any fundamental changes, it has become a symbol that has more to do with the rest of Latin America than with Cuba itself. It is no longer feared that Cuba will contaminate other countries with its ideology; the only thing it has left is an anti-American nationalism that will always be on public display in the Spanish-speaking world. This world demands the re-integration of Havana into the international community, and especially into hemispheric affairs. And an astute politician like Obama couldn’t help but see that in order to stake out the new position he wants for Washington — that of the good neighbor — he had to make the gesture. But the trip to the island is only the end of the beginning: The U.S. embargo, which can only be repealed by Congress, and over an even longer time frame, the return of Guantanamo [to Cuba], will be the signposts of a real and even more lasting normalization.

The trip through Argentina, no doubt less important if we’re talking about memorable events, is nevertheless a complete package: It has a starting point and an end, and predicts better relations between Washington and Buenos Aires. The trip was a huge gift, and a celebration: a gift to a president who has had barely 100 days in the Casa Rosada,* and is facing an economically difficult future; and an act of faith that Mauricio Macri is the type of leader that the U.S. wants in Latin America, above all now that Lula and Rousseff, with their legal problems, have consigned Brazil to a long time in limbo. Previous visits tell the story: When she was Obama’s secretary of state, Hillary Clinton visited Uruguay, Brazil, Chile, Costa Rica, Guatemala and the Dominican Republic. And the president himself visited Brazil again in 2011, plus Chile and El Salvador. Macri has done a valuable favor to U.S. diplomacy, saving it from the Kirchnerist Peronism that was in power in Buenos Aires, and from [former] president Cristina Fernández [de Kirchner], whom the U.S. president liked personally, but who wouldn’t stop intoning the anti-imperialist chants of the Chavez movement.

Finally, in terms of U.S. domestic politics, the president’s moves have been thought to favor Hillary Clinton as much as to tie her hands; although she has never been his favorite, he has to wish that she will succeed him.

Obama is trying to leave as clear a field as possible for the Democratic candidate. In the wider world, the U.S. and Iran have signed a landmark nuclear agreement, in spite of furious Israeli opposition; he has curbed the U.S. military presence in Afghanistan; and he has cut back on the use of air power and special forces in Syria and Iraq. In Latin America, he has cooled down the Cuban dispute, and has chosen his liege man in the case of Argentina. But it also limits the wiggle room for a “President” Clinton because it’s very likely that she wouldn’t have gotten very far in the negotiations with Tehran, and that she would have done even less well with Havana.

Free to follow his better instincts, Barack Obama would probably be what in Europe is called a Social Democrat, given his across-the-board moderation. But under the constraints in the U.S., with both houses of Congress controlled by the Republicans, he has had to practice the politics of the possible. The best illustration of this is the U.S. diplomatic paralysis in the Near East where, although he dislikes the Israeli prime minister, Benjamin Netanyahu, Obama has faithfully followed the Israeli line in the conflict with Palestine. And Mrs. Clinton, whose position has now crept to the right of the president, will have a hard time dealing with challenges like those that her opponents have served up to her all her life — especially, now, contemplating the possibility of facing off in the struggle for the White House against a Republican from the extreme right, whether Donald Trump, colorful, but astute and dangerous, or the predictable Ted Cruz.

This is what we could call Obama’s legacy.

* Editor's Note: The official residence of the Argentine president