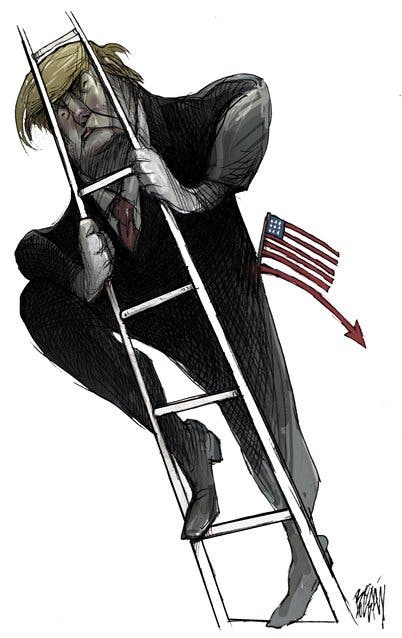 He proclaims it, and they believe him. History and reality dare contradict him.

Donald Trump never misses an opportunity to proclaim himself the new leader of the anti-political revolution, the only man capable of defeating an establishment that, from Washington and Wall Street, is guiding the United States toward inevitable economic, political, diplomatic and cultural decadence.

At least the 11.5 million Americans who have, to date, voted for him in the Republican primaries agree with that message. About as many affirm, in surveys, that the businessman will be their pick for the White House in November’s election.

They lean toward him despite the fact that reality daily belies Trump and his pretensions of being an anti-political hero.

His style divides and polarizes. His substance – or the little of it he has shown so far – proposes aged solutions of dubious success for the problems of today and tomorrow in one of the most innovative countries in the history of humankind.

Rather than anti-political, his specialty is old politics.

Trump isn’t the first American leader with enormous intuition and a gift for communication to pay attention to the country’s malaise, take charge of it and promise to repair it. He promises to relieve that group of Americans’ sense that they are losing their privilege and space.

In the 60s, George Wallace did the same with equal force and got a similar reception within the United States. Wallace was the three-time governor of a conservative Alabama, a repeat candidate in the presidential primaries and one of the most charismatic politicians of that stormy epoch in the country’s history.

In the face of advancing civil rights and the political struggle of people of color, Wallace offered short, sharp and sensationalist counterpoints. Like Trump, he responded to sensitive problems of uncertain solution with slogans. “Segregation now, segregation tomorrow, segregation forever,” said Wallace, half a century ago. “It's freezing and snowing in New York--we need global warming!” says Trump, today.

The difference is one of reach. The magnate converts his phrases into tweets that his millions of followers later send viral, or into rousing declarations during mass gatherings that feed a media that, simultaneously disconcerted and hypnotized, reproduces each word of his speeches.

The old politics of Trump does not find its only comparison in Wallace. It crosses borders towards South America. The real estate merchant casts himself as a savior of national pride. He presents himself as the champion of the needs of those forgotten by the system. He promises fast, easy solutions for complex dilemmas. He insults and scorns his opponents even if—like the Clintons—they were once his friends. He aligns himself with or draws away from his party strictly according to convenience. He places small import on whether what he says is a blatant lie.

Trump is ideologically malleable, despite wanting to identify himself out of electoral necessity with a particular line of thought. Where his principles are unhelpful, he finds others, as he did with abortion (some years ago he supported it, today he does not.) His fanatic followers do not allow him to be questioned. And his detractors allow themselves to be swept up in the same sweeping wave of intolerance.

Who does the magnate remind one of if not a Latin American caudillo, a strongman, a cultivator of populism from Argentina and Brazil to Venezuela and Nicaragua, from the 20th to 21st centuries? Nevertheless, the causes of his rise and those of Latin America’s populist leaders also share the same roots. Perón, Getúlio Vargas and Chávez emerged because there was a silenced demand that wore the face of poverty, exclusion, inequality and lack of opportunities. These populist leaders listened to this demand and gave it a voice. And they gained power there, where others had shown themselves indifferent.

Throughout the campaign, Trump has increasingly amplified a malaise that includes some of those ingredients and adds others; a malaise the Republican Party itself ignored or, perhaps, never understood.

This United States bears little resemblance to that which the Democrat Barack Obama inherited in 2009 from Republican George W. Bush. The financial crisis that began in that country and spread across the entire world was not the American apocalypse predicted by many. In the almost eight years of Obama’s administration, the economy recuperated and returned to growth, although slowly and without any surprises. Obama could retire content next January. But he shouldn’t. While employment recovered, the same did not occur with salaries or the standard of living. Average household income increasingly declines and, with it, the American dream of the white middle class fades. This has not passed unnoticed by the government, but the government has done little to reverse it.

There, in the lost hopes of millions of Americans, Trump drinks. Moreover, those lost hopes, together with thinning wallets, feed the deepest prejudices. But if the emergence of Trump and the Latin American caudillos share the same causes, their consequences may be different. The incompetence and blind obstinacy of a regional caudillo may cause a country to implode, but the wave of external effects would be limited. That would not be the case were the White House led by a populist attached to old politics. The global risk would be great and the reach of damage, unimaginable.

The solutions Trump suggests for America’s challenges may end up just that: worldwide dangers.

To definitively reanimate the economy and treasuries of the state, the magnate proposes, for example, an energy revolution based on more fracking for oil and gas, the reactivation of the carbon industry and almost total deregulation of the market. Beyond the enormous environmental impact, the magnate seems unaware that the price of crude oil and gas collapsed in recent years precisely because the United States increased its production thanks to fracking. A paralyzed global economy and an excessive supply will once again push down the price per barrel.

That isn’t the only ancient recipe Trump offers for modern problems. The most well-known is probably the wall on the border with Mexico to stop immigration. Not only is this solution medieval, it will also encourage other nations to raise walls, which will lead to increased global divisions and greater diplomatic paralysis in the face of the planet’s worries. It serves Trump’s interests today to sow division, but not the world’s.