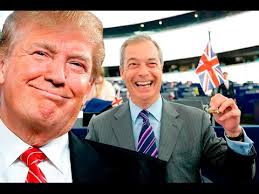 The results of England's referendum to leave the European Union have shocked the world. It signifies the explosion of populism sweeping the country, and serves as a strict warning to other democracies.

On the day England voted to leave the EU, Trump held a press conference in Scotland, offering his congratulations to those who voted in favor of the referendum.

Just as Trump pointed out, there are many similarities between England and America's situations.

Those in favor of leaving could be heard crying, “Make England great again”; Trump's slogan is “Make America Great Again.” But for the names of each country, the slogans are exactly the same.

Nigel Farage, leader of the United Kingdom Independence Party, has claimed that increasing immigration will also raise the risk of terrorism — no different from Trump’s anti-immigration platform.

Both men share self-absorbed attitudes, as well as a strong dissatisfaction and animosity toward established governments. They turn their backs on the rest of the world, putting their own country's best interests first.

Without receiving any benefits from the global economy, life circumstances aren't improving one bit; the class disparity is only getting wider. Only a small handful of the elite control politics, treating themselves like outsiders without reflecting the will of the people.

People in European and American society feel a growing sense of dissatisfaction, and a looming hopelessness — a situation unhealthy for a democratic society.

Meanwhile, seditious politics like Trump’s are great at winning over popular opinion, using extreme remarks to stir up fear and discontent.

And this Trump Phenomenon is not limited to England or America.

In Europe, there is a striking rise in anti-EU and anti-immigrant sentiment.

France's National Front has established itself as a major political force, and party president Marine Le Pen is set to be at the eye of the hurricane in next year's presidential election.

Support for the nationalist party Alternative for Germany is also gaining traction, just in time for the 2017 parliamentary election.

The outcome of England's referendum is encouraging right-wing parties, so we can expect EU skeptics to demand similar referendums.

In the wake of its debt troubles, Europe is also facing a refugee crisis. With anti-EU sentiment on the rise, it's undeniably possible there may be a domino effect of nations leaving the union.

Even aside from that, losing England — an economic superpower second only to Germany — will unavoidably weaken the EU. Its ability to cope with challenges like terrorism, the refugee crisis, and climate change will likely decline.

The international order, led by America after World War II, now faces a new source of concern, in addition to the challenges posed by China and Russia.

Martin Selmayr, chief of staff for European Commissioner Jean-Claude Junker, made news when he posted the following last May, written during the Group of Seven leading industrial nations summit in Ise-Shima:

“#G7 2017 with Trump, Le Pen, Boris Johnson, Beppe Grillo? A horror scenario that shows well why it is worth fighting populism. #withJuncker”

The middle class cannot pin its hopes on the future, and populism is directly connected to this disparity. Many world leaders came from the summit expressing such opinions.

The middle class is the backbone of democratic society in countries around the world, and it is dwindling, and there are no effective measures being enacted to combat the disparity.

And yet, the ones who invented populism are politicians with vested interests who rest on their laurels.

This rise in populism is a warning about democracy's risks. In order to overcome the risks, governments must regain the flexibility to remove that feeling of alienation that citizens feel, the notion that “I am an outsider.”

With this referendum, England's upper class leadership has rejected a state of unity with Europe. Hopefully, the EU will take note and promote reform.

If a government stays stuck in its old ways, an intolerant world where anti-foreign policy runs wild will be born.

Conflict based on race and sect wait down that road.

Windows and gates are depicted on the front of the euro, and bridges adorn the back.

Windows and gates represent an “open Europe,” while bridges signify the bonds between people.

England is not necessarily losing sight of its post-World War II ideals of pacifism; principles should become stronger through trial.