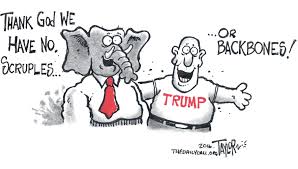 As if they have lost their senses, the Republicans are hornswoggled by Donald Trump’s slogans. The party of Abraham Lincoln has degenerated into the election club of a first-rate populist.

The U.S. Republican Party is in jeopardy of disintegrating. Its leadership ranks, of course, still refuse to accept this reality. That is understandable in the face of the pain caused by Donald Trump’s hostile takeover, but in the long run, the disintegration will be undeniable. America’s Grand Old Party has become a disparate bunch only somewhat held together by the hope of positioning a president again after eight years of abstinence and a blind hatred for the political opponent Hillary Clinton. Hope and hate, however, are not effective binding materials for a political arrangement.

If Trump wins the election and moves into the White House, the GOP can admittedly celebrate a success. Yet it will be one that the Republicans will still regret, because that will finally confirm what was implied at the nominating convention recently in Cleveland: An election club for Trump has emerged from the party of Abraham Lincoln and Ronald Reagan.

At the same time, it is already clear today: Trump doesn’t even need the Republicans any longer to move into the general election campaign. He has hijacked the party, and gutted and reduced its leaders to insignificance. It was a pathetic scene that Paul Ryan (after all, as speaker of the House of Representatives, he is third in line in government) and Mitch McConnell (who is, after all, majority leader in the Senate) delivered in Cleveland. They shifted and shifted and shifted again; they didn’t want to openly declare battle with Trump, but they also didn’t want to push him. In the future, lack of backbone in politics should be called the Ryan-McConnell syndrome.

Just as if they were intoxicated, the Republicans allowed themselves to be lulled by a charlatan who quite certainly hasn’t discovered the deep dish of politics. Trump’s platform is himself, a storyteller who takes offense and divides the world into black and white. If the 14 million voters who voted for Trump in the primary haven’t already noticed, the leadership of the Republicans must have taken note: Trump has no ideas; he acts like a used car salesman who makes a living by hoodwinking people.

Trump thinks first of himself, then it comes to nothing, and then Trump thinks of himself again. The worries and needs of anxious Americans are heartily irrelevant to him as long as these people just mark the right box. His message is a message of fear. Trump stirs up the fears of the people and at the same time, he offers himself as the only one in position to quell these fears again.

Just as if they had lost their senses, the Republicans are hornswoggled by Trump’s hollow slogans, and they have developed from an optimistic party into a party of the apocalypse. The picture that they sketched at their convention, contrary to all fact, was bleak: A country stands on the verge of ruin. Shamelessly they designated Hillary Clinton as the one solely responsible for all of the problems of this demise. Clinton, about whom there is justifiably enough to criticize, will withstand that. Primarily, whether or not undecided voters believe in Trump’s shenanigans, however, is not concluded by a long shot. In the end, Clinton still profits from this flat line of reasoning.

If it comes to pass, if Trump loses the election against Clinton on Nov. 8, then that, more than ever, would be the end of the Republicans as we know them. First they promote eight years of obstruction and block President Obama’s every proposal. And then they try with lies, deception and shenanigans to regain the White House with a first-rate populist—and fail once again. How could this party be taken seriously then, or can we already speak about being a laughingstock in this case?

For too long, the leadership ranks of the Republicans, which have in the meantime been neutralized by the developer from New York, looked away and ignored the fact that considerable parts of society no longer feel represented by them. The enraged citizenship on the Republican side discovered a man in this presidential election who doesn’t need a party because he is his own party.

That doesn’t appear to cause the Republicans much worry yet. Remarkable. Because the situation is not as bleak as Trump depicts it. But it is serious. “America first,” the isolation course that Trump declared to be the measure of all things at the end of the convention in Cleveland, is highly dangerous. In times of globalization and terrorism, the world needs a strong, engaged America, every bit as much as America needs the world. With a President Trump, America would be less intensely involved.