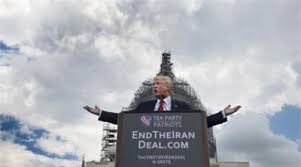 The Republican presidential nominee, Donald Trump, represents a notable phenomenon in an American political process which can be called “Trumpism.” Trumpism is embodied by the large controversies that surround his candidacy and the nomination by his party, and his dangerous remarks about minorities, building a wall between the U.S. and Mexico, and prohibiting Muslims from entering America. Trump is the result of anxiety both at home and abroad.

Trump represents the huge crisis that the Republican Party has experienced since the decline of its influence and control of neoconservatives during the presidency of George W. Bush. The party has not since been able to rebuild itself in a way that would ameliorate the negative effects of that period. As a result, it was unable to present a consensus candidate for president who could unite the party and pull it out of this crisis. On the contrary, the Trump candidacy has intensified this division. With the failure and subsequent withdrawal of prominent candidates like Ted Cruz and Jeb Bush, Trump has become the wanted candidate after his success in the primaries, and he represents a continuation of the party’s crisis.

Despite the fact that everything indicates victory for Democratic candidate Hillary Clinton, a possible Trump victory nevertheless raises questions about the extent of change in American foreign policy, especially with regard to the Middle East. Trump has no experience in foreign affairs and his speeches are unclear about the crises in the region, especially with regard to Syria, Iraq, Libya and Yemen; he is even unclear about traditional allies in the region. All Trump has provided is a plan to reject the nuclear deal with Iran, his objection to sending troops to fight the Islamic State, a stand against receiving Syrian refugees, and his intention to maintain Israel’s security and coalition forces. Therefore, it is impossible to speak of a Trump doctrine with regard to the role of America abroad, whether America will get involved and intervene, or isolate itself. On the contrary, we will see a Trump policy which combines incendiary statements and the preservation of American interests in the region. Certainly, not everything Trump has said during the primaries will become policy after he is sworn in, but there will be some changes. And these changes will take place within the framework of American foreign policy and will not affect America’s overall strategic goals. Regardless of who wins, there are new variables that make up the framework for American policy in the region, even if it is Trump. This framework is embodied by the following factors.

The experience of the U.S. administration made it clear through its handling of the Arab revolutions in Tunisia, Egypt, Libya, Yemen and Syria that the administration did not want to take an active role, either in the outbreak of those revolutions or in directing the responses to them. The Obama administration has adopted a “wait and see” strategy, where its position has been developed and its policies have been based upon the course of its interactions during the Arab uprisings. The U.S. sought to develop a strategy founded upon finding a balance between the idealism of supporting any democracy and the revolutions of the Arab Spring, and between the realism of maintaining U.S. strategic interests in the region with Arab Spring countries. Therefore, U.S. policy has been considered a flop with respect to the handling of these crises, which means the new administration will not have the ability to fully guide interactions with the region.

American policy is no longer limited to alliances with the ruling regimes in the region to achieve its interests and goals (especially in the war on terror) in return for U.S. support to maintain the legitimacy and persistence of the regimes. It is now Arab public opinion that is the main factor in American foreign policy for the countries of the region, especially those affected by the Arab Spring, and this has made U.S. foreign policy more independent and delicate. Therefore, the new American administration must take Arab public opinion into account with respect to its policies toward the region and its alliances as it seeks to achieve its interests in the Middle East.

The Emergence of Other Actors in the Region

America is no longer the principal actor in Middle East affairs due the rise of other international powers (e.g. Russia and China), especially during the period after the Arab Spring revolutions, when Russia’s role became prominent and intertwined with a number of crises in the region, especially the Syrian crisis.

In addition to that, there are a number of factors that govern American foreign policy toward the Middle East and ensure the continuation of American policies and involvement in the crises, regardless of the winner in this election. These factors are manifested in the American strategic interests in the region: the protection of Israel, maintaining a stable price and supply of oil, the fight against terrorism, opposition to weapons of mass destruction, and ensuring the stability of allied countries. The only change that will take place will be with respect to the mechanisms of American policy, not the trends.