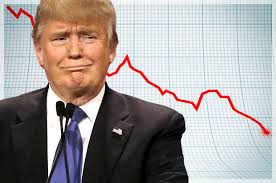 “A president commands respect and requires people to look up to him in awe, but Trump has been the butt of jokes around the world for a while now. From his hideous hair to his attitude on the television show he hosts to the ‘infrastructure’ his company builds — everything he does is a subject of roasts across the world. Do we really need a guy who is the center of jokes to be the most powerful person in, and the face of, our nation? This man will push back America’s cultural progress by about four to five decades, if not more! He is also one of the stupidest people to run for this position!”

—A quote from Joseph Stewart’s book, “Donald Trump: The Top Reasons He Must NOT Win the 2016 Presidential Election.”

The Democratic presidential candidate gave a long, direct, fiery and well-argued speech in Columbus, Ohio, on July 21, 2016, in which she criticized the Republican candidate and magnate’s economic plan magnificently, insisting that his election would lead all Americans into a recession and that he would come to be known as “Recession Trump.”

The best-known economists, no matter their political persuasion, have made it known that Trump’s ideas would be economically catastrophic. While Donald Trump has written many books on the subject of business in which he’s stressed the importance of finding a comprehensive solution to pay back U.S. sovereign debt securities, all of these books seem to end at “Chapter 11,” Hillary Clinton pointed out, in an ironic allusion to the U.S. bankruptcy code.

The Democratic candidate, who has secured her party’s presidential nomination, stressed that given the confidence and credibility accorded to the United States in the world, there is no room for games in this election, which could end in economic catastrophe. In truth, even if the United States were to sell off all of its planes, the Statue of Liberty or let some multimillionaire convert Yosemite National Park into a private country club, the collected revenue from these transactions still wouldn’t approach the level of debt currently owed.

U.S. debt is so high that one has to believe that neither of the candidates knows what to do. The Republican candidate’s profound ignorance on the subject explains how he has been able to banter about debt in this way. It’s also important to remember Trump’s consistent refusal to release information from his personal tax returns — something that is customary in presidential elections — and which he insists is impossible to do because, as he says, he is currently under an audit by the Internal Revenue Service.

So, what is he afraid of? Perhaps he doesn’t want Americans to know that he hasn’t been paying at the correct tax rate with respect to his colossal income, or maybe he’s not as rich as he says. It could also be that he hasn’t donated to charities as much as he’s bragged. Whatever the reason, Americans must be allowed to review Trump’s finances before Nov. 8, 2016, the date of the 58th incarnation of the U.S. presidential elections. It’s for this reason that Clinton destroyed her opponent’s economic plan point-by-point in a scathing speech, labeling Trump too dangerous to manage the U.S. economy.

The Democratic Party officially nominated ex-Secretary of State Clinton as its presidential candidate during the Democratic Party National Convention, which took place July 26, 2016, after she obtained more than 2,382 delegate votes in the Wells Fargo Center in Philadelphia. She thus became the first woman to represent one of the two main U.S. political parties and was made responsible for the arduous task of uniting the party behind her candidacy.

The time of risks, jokes and ridiculousness has ended not only for the Republican side of the aisle but also for the party’s political adversaries. The mocked Republican hopeful officially became the Republican Party’s presidential candidate even before Clinton did by becoming the champion of conservative principles, which have lost touch with reality. The Republican Party National Convention was held in Quicken Loans Arena in Cleveland, Ohio, from July 18 - 21, 2016, where the party chose its presidential and vice presidential candidates. While there was the possibility of maneuvering in such a way that would have forced Trump to renounce his candidacy during the party convention, such a course of action would have caused the various factions within the party to fragment event more, possibly to the point of no return.

All of this being said, is this Clinton’s election to lose? She will have to face the voluble Trump, who has left no doubts about what he thinks about women in general and, more particularly, about his opponent. Yet, it would seem that Trump doesn’t have a chance of winning in the presidential election, a consequence of the tumultuous, insidious and insulting campaign he has run up until now. While the campaign has been filled with scandal, Trump has also managed like no other candidate to incite hatred and to divide Americans — primarily those from his own party. With all of this said, in all reality, does Trump still have a chance of winning the presidential election?

Trump has said himself that his own potential candidacy is a reflection of how the political establishment has lost touch with its electorate. Trump’s appearance and seemingly unstoppable growth is explained not only by three back-to-back decades of setbacks and decline for the American middle class but also by stagnation in the productivity growth that the country had experienced for a century and a half. The great amount of anger that exists has been translated in such a way as to favor candidates that have shunned the traditional presidential model.

The future of the United States is naturally a point of concern for Americans, yet it also worries the rest of the world. It’s for this reason that many have asked themselves, if Trump were to win in the presidential election, what would his foreign policy be like? Over the course of his vitriolic campaign, he has left clues and clear signs pointing to what his actions would be, starting with the striking idea that alliances pay for themselves — that is to say, whoever wants protection from the United States must pay for it. The Republican presidential candidate defends his stance that Europe must bear all costs now incurred by the United States to maintain its presence in NATO. He forgets, though, that North Atlantic defense is a central issue for the country’s security and that it’s a strategic region of interest. This fact makes it unthinkable that United States membership in NATO is being called into question, much less debated.

This line of thinking has been affirmed and championed unequivocally by Trump, who insists that millions of dollars are being spent on planes, missiles, ships and related logistics and that maintaining such activity won’t come free. He has insisted that U.S. allies must take up either all or a greater part of these expenditures. This same scenario is also taking place in Asia, he insists, with Japan and other countries being protected by the Pacific fleet. This line of argument runs counter to what the current American president has been doing.

While his ideas are irrational, make no sense historically and disregard the stability of all parties involved, the Republican presidential candidate has clarified that countries will neither be called upon to increase their own military expenditures nor directed to pay for the majority of expenses incurred by American bases abroad. Countries under American protection, rather, will be required to cover a significant part of the U.S. defense budget if they want to continue enjoying the presence of American armed forces in these regions.

The price tag could amount to several hundreds of millions of dollars annually. Given that no country would want to make such a contribution, however, the Republican presidential candidate would end up having no other choice but to take the irresponsible and irrational step of breaking the United States’ current treaty obligations. Trump does not believe that the United States has strategic interests in the European or Asian continents, having interpreted quite well the prevailing sentiment of many Americans calling for an American withdrawal and return to isolationism reminiscent of the past century. The next president of the United States, whoever that may be, will face enormous popular pressure to keep the country out of all problems and all regions of the world. Perhaps it hasn’t been fully appreciated that a fundamental shift has taken place in prevailing political attitudes within the United States, as vast subsets of the electorate — the middle and lower classes, Caucasian class, African-Americans and Latinos, included — are now blaming globalization and the unrestrained greed of businesses for all of their suffering and, more particularly, for their lack of confidence that their children and grandchildren will enjoy a better quality of life.

If Clinton were to win the American presidential election, as polls released on Aug. 5, 2016 have predicted, giving her 47.4 percent of the predicted vote count compared to Trump’s 40.6 percent, her strategy would focus on continuing policies put in place by Barack Obama, especially given that the American economy will continue growing by 3.7 percent in the third trimester of 2016.

The Republican presidential candidate is receiving increasing criticism, both within his own party as well as from the political opposition, over his comments regarding the parents of Humayun Khan, a United States Army captain and Muslim-American who died in combat and whose father gave an impassioned speech before the Democratic National Convention. President Obama, meanwhile, has stated that Trump is not prepared to assume the office of president of the United States, while various other Republican Party bigwigs have affirmed their plans to vote for the Democratic candidate. Should he continue down this path, Trump could perhaps even self-destruct before the presidential election occurs, dragging the Republican Party down with him and killing his dream of becoming the president of the United States.