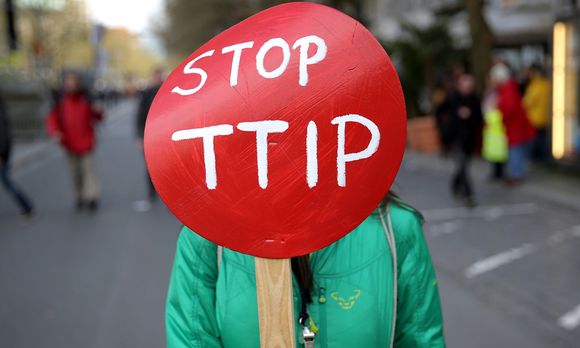 France has pronounced the free trade agreement with the USA dead. Austria's government is also becoming increasingly skeptical. The EU and USA are pounding out exhortations to carry on, but a deal under Obama is unrealistic.

Now it has come to this. Top politicians in Europe are officially laying the Transatlantic Trade and Investment Partnership, or TTIP, to rest. Paris no longer wants to discuss freer trade relationships with the Americans, Matthias Fekl, the Social Democratic undersecretary of state for foreign trade informed us. Just the previous day, Sigmar Gabriel, Germany's minister for economic affairs, declared that the talks had “de facto broken down.”

Austria's leading politicians showed equal skepticism when asked by Die Presse. The chancellor of the Social Democratic Party of Austria would prefer to pursue the CETA deal with Canada when it comes to free trade. The plan for the pact with the USA to be negotiated by the end of the year, on the other hand, is “very, very unrealistic.” Vice Chancellor Reinhold Mitterlehner of the Austrian People's Party wants to “completely restart the negotiations.” An export-oriented country like Austria would need to, at the very least, examine the chances of a trade treaty and then make a decision. Mitterlehner does not believe a solution will be reached before the end of the year – meaning negotiations would continue without TTIP supporter Barack Obama. In fact, the dialogue between Europe and the USA has been at an impasse for months. Mistrust dominates the conversation on both sides. In the emotionally charged debate surrounding chlorinated chicken, environmental standards and supposedly “evil” arbitration courts, the economic advantages of free trade have been pushed from view. Even in Austria, a country that earns the majority of its money from outside its own border, two-thirds of people think very little of the TTIP.

Waiting for the Next US President

So it is not very helpful that Brussels and Washington are officially sticking with the existing schedule. “If the conditions are right, we are prepared to wrap this treaty up by the end of the year,” said committee speaker Margaritis Schinas this week. The discussions are in a decisive phase, according to him. The U.S. trade representative, Michael Froman, even cites “constant progress.” And Germany's chancellor, Angela Merkel, wants to continue negotiations in any case. At the informal meeting of the ministers of the economy on Sept. 22 and 23 in Bratislava, there will be an evaluation of the current state of negotiations. However loudly some states call for an end to the talks, they will not be officially canceled beforehand. For that, the approval of all 28 member states of the EU would be necessary. Many of them, however, cannot understand the criticisms of the TTIP.

In any case, it will be close between the EU and the USA. The original plan to conclude the negotiations before the U.S. elections on Nov. 8 is no longer possible, according to estimates from diplomats in Brussels. At this point, there have been 14 rounds of negotiations, but the most sensitive points, such as the inclusion of agriculture or protections for investors (arbitration courts), have not yet been covered extensively. The next round will take place in October. No one is expecting a breakthrough.

Theoretically, the current U.S. government can continue to negotiate until the inauguration of the next president on Jan. 20, 2017. In their campaigns, both Donald Trump and Hillary Clinton are presenting themselves as extremely critical of free trade. If the Democrats stay in power, then at least some measure of continuity can be expected from the responsible parties in Washington. In the case of a Republican victory, the cards will be completely reshuffled with Donald Trump.