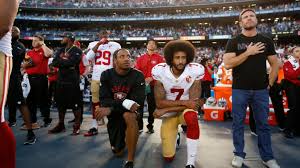 A professional athlete remains seated during the national anthem and unleashes a scandal that even reaches Barack Obama.

The story reaches as high as the president and as far as China. There, at the G-20 Summit of the leading rich and developing nations in Hangzhou, Barack Obama himself makes a statement about an American football player who dared to remain seated during the national anthem.

The player is Colin Kaepernick, quarterback for the San Francisco 49ers football team. During a warm-up, the son of black and white parents refused to stand. In so doing, the 28-year-old wanted to protest oppression of the black population in the United States and to give voice to all those who, according to Kaepernick, have had no voice in public up until now.

The matter has developed into a national incident and is dividing the country into two camps: On one side, staunch patriots, at the top of which presidential candidate Donald Trump all too gladly likes to place himself. On a radio show, Trump suggested that Kaepernick emigrate – to wherever a professional athlete in a sport that is carried out almost exclusively on American soil is supposed to emigrate.

On the other side are sports stars like Kaepernick’s teammate, Eric Reid, or national soccer player Megan Rapinoe. Both emulated Kaepernick and kneeled during the playing of the national anthem instead of standing erect and placing one’s right hand over one’s heart as is customary. U.S. commentators count Obama, too, as one of Kaepernick’s supporters even though he actually only emphasized Kaepernick’s constitutional right to express his opinion.

It is reminiscent of the discus thrower Christoph Harting who did not assume a patriotic stance at the medal ceremony at the Olympics. One imagines if instead of staunch Germans from the ranks of the AfD and some CSU members, Chancellor Merkel would have taken a position. Even if Harting’s protest had been explicitly political like Kaepernick’s was, the involvement of the most powerful politician in the country would have only caused people to shake their heads.

Yet Kaepernick’s protest takes place during a time that guarantees him special attention. On the one hand, Americans have for months been engaged in an intensive debate about institutionalized racism, triggered by examples of police violence that are getting out of hand. On the other hand, big American sports leagues are on break and reporters leap correspondingly at any snippet that can be reported.

What is more, whoever wants to understand how such a topic can create waves that reach as high as the president must direct their view to a primal understanding of the American identity. National symbolism plays a greater role in the U.S. than anywhere else on the planet. In many suburbs, the stars and stripes hang on every house in a row. Along with the national anthem, students learn the oath of loyalty to the nation and flag called the “Pledge of Allegiance.” In many elementary schools, daily instruction begins with it. For high school students, the recitation of the 44 presidents up to now is a mantra like the “Lord’s Prayer” for students in a Catholic boarding school. Whoever does not honor the flag is also withholding honor for fallen U.S. soldiers and is trampling on their graves.

For Americans, this national identity embodies the validation of democratic values like equality, freedom and independence, but at the same time also expresses classic examples of nationalism like chauvinism toward other “peoples,” racism and the tendency toward the idealization of military honors. And the discussion of Kaepernick’s refusal to honor the flag moves in exactly this field, in which, in his opinion, people are oppressed due only to the color of their skin.

Kaepernick will continue his protest even when the National Football League kicks off again on Friday night. He will have to fight for his place in the 49ers’ starting lineup, due more to his athletic performance and less to how he has formulated his political convictions.

He now wants to follow up his words with deeds. At a press conference, Kaepernick said that he will donate the first $1 million he earns this year to social institutions that concern themselves with the issues of oppressed minorities in the United States.