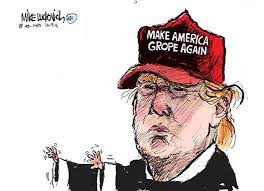 After Donald Trump’s objectionable statements with respect to women, it appeared unthinkable that even one person would vote for him. That was a mistake.

Anxiety. Disbelief. State of shock. That’s the way it feels when men casually grab women’s behinds and then continue to speak politely as if nothing has happened. That is exactly how Nov. 9 felt when Donald Trump was elected president of the United States. A man who says he can presume to do anything, even grab women between the legs, who brags about sexual abuse and whose supporters adorned themselves with stickers saying, “Finally someone with balls,” now gets the most powerful office in the world. Whoever thought that after the fall of the Berlin Wall, the disappearance of borders in Europe, and the first black U.S. president that it would now be a woman’s turn was bitterly disappointed. Because Trump showed up. How could that happen? How could 42 percent of women who voted give their vote to a sex molester? Here are three attempts at explanation.

Number 1: The times are turbulent. Anyone who sees the news wants to get drunk on feel-good-tea afterward, raise the garden fence and fall into a pleasant, cozy Biedermeier behind it and focus on yoga, baking cakes and children. What is so bad about home and hearth? It is thoroughly understandable to want to escape the troubles of the world, to draw the borders closer and send ahead a strong man who purports to be afraid of nothing. Trump styled himself as such a person, as a superman who will keep the outside world at bay and away from Americans. The home, however, in which a woman can take refuge with her family, is manageable and peaceful (if it weren’t for the 270 million guns in private U.S. households, but that is another story).

Number 2: More is demanded from women in politics than from their male colleagues – and demanded from female voters also. A powerful woman must demonstrate toughness and at the same time show her emotions, but please, only in measured doses! Too much feeling might seem whiny; too much toughness is construed as coldness or excessive ambition. It is a balancing act that requires nerves of steel. Hillary Clinton has these nerves of steel. Many used that to reproach her as being unfeminine. It’s a vicious cycle. In addition, powerful women are under double scrutiny: Consider all that was read into British Prime Minister Theresa May’s inclination toward wearing fancy pumps. There was little written about Boris Johnson’s preference for colorfully striped or polka-dotted socks. It’s “ladies first” in politics primarily when it’s a case of trap doors.

Number 3: Trump is an entertainer who has long been welcomed into the living rooms of Americans with his reality shows. He performed as the showman during the election campaign. His sexist statements were objectionable, disrespectful – and entertaining for an alarming number of people. The coarser his language, the more airtime and headlines; that was the name of the game. The score went up and the media played along. The fact that Clinton was so aggressively attacked during the campaign didn’t only have to do with the things she was accused of: connections to Wall Street, the email affair, the establishment for which she stands. She fought against sexism. And against a man who knew those ropes like no other. “If Hillary can’t satisfy her husband, what makes her think she can satisfy America?” he said to humiliate his rival. About Megyn Kelly, moderator of the conservative Fox television network who made it uncomfortable for him, he said she was not objective, that “blood was coming out of her wherever.” He didn’t spare his daughter Ivanka either. “If Ivanka weren't my daughter, perhaps I'd be dating her," he said. Many women ignored his sexual assaults – they saw that finally someone had broken away from the establishment. That he also put that into words only heightened the effect.

Donald Trump as 45th president of the United States is like a kick in the gut for many women. The state of shock will dissolve. Then, in the days to come, we will have to defend Western values in the United States, too.