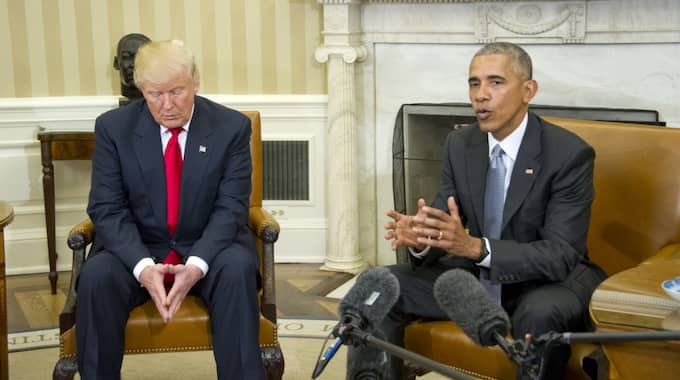 Donald Trump offered a side to his personality that we have not seen often as he sat next to Barack Obama in the White House: Donald the Humble. It was as if the seriousness in what Trump had just managed to do started to sink in.

Of course, there is plenty for Donald Trump to be humble about. There are not many things that can compare to the American presidency in terms of size, power and weight of responsibility.

It is one thing to attack Barack Obama during the election campaign, as Trump often did, yet another to sit there next to the president on 1600 Pennsylvania Avenue.

Especially to sit next to President Obama and know that soon the power and the glory is yours. And the responsibility.

The two of them were politeness personified when they made their short appearance in front of the TV cameras. Anything else would have been very surprising.

Both of these men sent signals to their allies yesterday to show that the election was now over. For the benefit of the U.S. it is important to look ahead now and that the incoming and exiting administration talk to each other and cooperate.

Naturally, most of it happened behind closed doors. Donald Trump claimed that the meeting was planned to last 10 minutes but lasted 90 minutes, and it would have benefited from being even longer.

“Ten minutes” sounds like a Trumpian exaggeration – or understatement – but nothing suggests that the meeting was anything other than a success. It was just the two of them in the Oval Office.

Donald Trump is a person who is easily offended if insulted. However, he is also quick to offer praise if he is met with respect.

Obama will most definitely have greeted Trump yesterday with all the respect that a president-elect deserves. This is bigger than the individuals Trump and Obama.

Mario Cuomo, former New York governor, said that you “campaign with poetry, but rule with prose.” We did not get a lot of poetry in this election, but the message still stands.

Things are said during the campaign that should never be taken literally. When the election is finally over, a new reality is waiting.

It was that reality that we got sight of yesterday. The amity put on display now will not remain, but the transfer of power will take place in a traditional, American, and very orderly fashion.

Trump said yesterday that the two had never met in person. They had, however, been in the same room before.

President Obama openly made fun of Donald Trump during a gala dinner in April 2011, shortly after the most heated arguments around Obama’s birth certificate. This was a fight led by Trump. Obama concluded that “the Donald” can “finally get back to focusing on the issues that matter -- like did we fake the moon landing?” or “What really happened in Roswell?”

He also did not hold back on the jokes about Donald Trump’s host role on Celebrity Apprentice. Donald Trump had a very strained smile on his face where he was sitting at his table.

But Trump did not forget that night. It was by all accounts a contributing factor in his decision to run for president himself.

In any case, Trump had the last laugh.