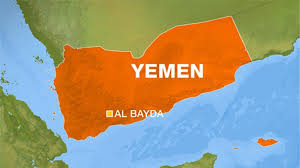 He is the first American soldier to die on the battlefield since Trump took office. He was a member of the U.S. Army special operations forces Navy SEALs Team 6, killed in Yemen in the province of Bayda during a military operation against al-Qaida.

According to Guido Olimpio from the newspaper Corriere della Serra, an Osprey aircraft also went missing in action. Apache helicopters were used as well. The official story asserts that the vehicle was destroyed on the ground after suffering a crash landing. But for now, confirmation of facts is impossible. Three other American soldiers were injured during the standoff with the jihadis. Joseph Votel, the commander of U.S. Central Command, said in a statement, “We are deeply saddened by the loss of one of our elite service members. The sacrifices are very profound in our fight against terrorists who threaten innocent peoples across the globe.”

The military operation killed 14 terrorists, three of which were al-Qaida leaders. But even in this case, reports are conflicting. According to a local source, in fact, at least 57 jihadis were killed. Though the Pentagon may deny it, the civilian death toll from the standoff was more like 16, eight women and eight children.

The three al-Qaida leaders killed in the raid were brothers Abdul-Raouf al-Dhahab, Sultan al-Dhahab and Seif al-Joufi. The news agency Ansa has reported that “the Dhahab family is considered to be allied with al-Qaida, which according to intelligence sources, is centered in the Bayda province. A third member of the same family, Tareq al-Dhahab, was killed in a previous raid years ago.”

Operations of the Obama Administration

The Obama administration carried out various raids in Yemen. “Heavily relying on unmanned drone strikes, numerous raids were led right up to the change of guard at the White House,” Guido Olimpio has noted.

On the other hand, Trump relied on special forces for an operation that, at least in theory, should have been surgical (even though it didn’t happen that way, given the high civilian death toll).

According to The Guardian, this is the first ground intervention completed by the Americans since Yemen collapsed into the chaos of civil war two years ago. From that moment, in fact, both al-Qaida and the Islamic State have exploited the power vacuum that was created in the heart of the country in order to carry out various terror attacks. The latest, in chronological order, was made by the Islamic State group last Dec. 18, causing the deaths of 49 people.

The war in Yemen does not only concern the Houthi rebels and the Saudi Arabia-backed government. It is taking on a much broader scenario in which the interests of various international powers are engaged. And that is why every move that Trump makes in the coming days and months will have direct consequences. For now, this is only the beginning.