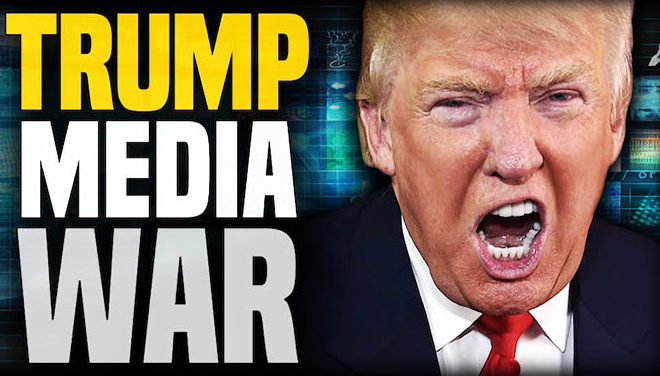 The inauguration of President Trump was marked by the beginning of a new stage of open opposition between the White House and the media. Now, American citizens and people from all over the world are watching a live broadcast of the new reality show, “Media against the President,” on a daily basis. This struggle brings a lot of risk for Trump personally and for the institution of the presidency as well.

There are recorded cases in U.S. political history when the media has directly influenced the president’s fate.

The most popular one occurred at the beginning of the 1970s, when Washington Post reporters played the main role in uncovering the Nixon scandal and in reporting its development. As a result, Watergate led to the resignation of the 37th president of the United States.

It is equally well known that seven years into Ronald Reagan's presidency, three leading U.S. broadcasters rejected a White House request to allow Reagan to deliver a speech, citing commercial unreasonableness and saying it would be a waste of airtime.

Recently, other presidents tried to find common ground with the leading media, after which there were no major scandals.

Now, we are not even talking about a specific incident or scandal, but about the possibility of a major war between the president and the media.

Failure of the System

Relations between Trump and the media went wrong at the very beginning of his political career, although he previously was one of the media’s darlings; political coverage and business coverage vary enormously in the mass media.

The media were quite skeptical about the billionaire’s chances of success. Nevertheless, Trump won in the Republican primaries, and then, contrary to all expectations and forecasts, he beat Hillary Clinton. This was like a cold shower for the American mass media. The time-tested propaganda machine that was aimed to create presidents had failed.

Trump and his administration did not slow down after his inauguration, but instead maintained a line of direct opposition to the media.

The new American president met with representatives of the intelligence community at CIA headquarters, where the head of the White House announced the start of a war with the media. "As you know, I have a running war with the media. They are among the most dishonest human beings on Earth," said Trump. He pointed to how the American media covered his inauguration. According to the president, journalists deliberately distorted information about the number of people in attendance at the event.

Trump’s opponents were emboldened by this stance. “This administration, armed with a new way to communicate directly to the public through social media, has started to conduct a multi-front war to systematically undermine the ability of the press to fulfill its responsibilities as a watchdog on government and as the main source of information for political news,” CNN reported.

Meanwhile, the president’s determination to challenge the media was confirmed by his close advisers. Reince Priebus, White House chief of staff, accused the U.S. media of attempting to denigrate the legitimacy of the president. Senior Trump adviser, Kellyanne Conway, said in a television interview that the administration is "going to have to rethink” its relationship with the press.

“We’re not perfect, we’re not going to get everything right. But there’s a big difference between constantly having a negative mindset about everything, what we got wrong, what we didn’t do right, as opposed to at some point, what did he get done in his first week, how many jobs did he save,” said Press Secretary Sean Spicer at the George Washington University.

The White House translated words into deeds. The publication Politico, citing a source in the Trump administration, reported, "The White House has refused to send its spokespeople or surrogates onto CNN shows.” Earlier, Trump pointedly did not allow a CNN journalist to ask a question during a press conference, saying the channel publishes "fake news.”

This is not surprising. During the presidential race, media mogul and founder of CNN, Ted Turner, openly supported Hillary Clinton. After her defeat, the network exceeded the limits on all acceptable norms of journalistic ethics. On the eve of the inauguration, the channel broadcast a scandalous story about the possible consequences of a Trump assassination during the inauguration. It was a challenge.

Representatives of the new administration have not yet visited any CNN shows. Spicer expressed the White House’s position at a press conference: “I’m not going to sit around and engage with people who have no desire to actually get something right.”

According to Stanford University professor Theodore Glasser, “News media have recently been – and should continue to be – aggressive in their coverage of the Trump presidency. Trump and his staff regard the press as the opposition. And they’re right. An oppositional press – an adversarial press – is a vitally important tradition in American politics. Public officials often dislike that role as it applies to them but at the same time they appreciate its importance. Not Trump. He’d prefer a press that simply republishes his tweets,” Glasser said.

We are witnessing the demolition of the system. The previous U.S. administration also broke the unspoken rules of the game.

The media openly refer to those who intend to take advantage of the circumstances. "Obama and his team are monitoring what is happening in the White House, and do not exclude the possibility that Obama will join the tough opposition to Trump in the coming months.”* It is possible that the mass protests, which are eagerly illuminated by Trump’s opposition media, will soon gain leadership in the person of Barack Obama.

The media do not hide the names of those who are ready to protect the president from press attacks, and are possibly even exerting severe pressure on the press and television news.

Stephen Bannon, the former head of Trump’s election campaign, occupies a special place on Trump's team. Bannon knows how the media incites hatred toward politicians. Bannon has produced documentaries on conservative politicians, as well as revealing documentaries about their opponents. But he did not circumvent the Clintons by making a scandalous film about them.

From 2012 to 2016, Bannon led Breitbart News, one of the most influential conservative media outlets in the United States. In August 2016, he left his post to become chief strategist for the Trump campaign.

After Trump took over the Oval Office, Bannon was appointed senior adviser to the president, and he is now in charge of political strategy. On Jan. 28, Trump appointed him to the National Security Council. The main political consultant at the White House does not hide his attitude toward the opposition media. “The media should be embarrassed and humiliated and keep its mouth shut and just listen for a while,” Bannon said. “The media here is the opposition party. They don’t understand this country. They still do not understand why Donald Trump is the president of the United States.”

It's Getting Really Tough

Trump climbed the political Mt. Olympus in an atmosphere of harsh media confrontation. And now this conflict risks becoming a full-scale war.

It’s hard to predict who’s going to win this war. Conflict is a normal condition for the new leader at the White House and his team, and a state in which they can successfully pursue their agenda.

It’s also necessary to take into account that Trump has great experience working in the media. He was the executive producer and host of the popular reality show “The Apprentice” for more than 10 years. He successfully used his audience manipulation skills during the election campaign and has already applied those skills to his new position. On the other hand, we need to keep in mind that this new war is not only Trump’s war with mass media. It is the result of profound contradictions that are literally tearing the American establishment apart.

One gets the impression that if this conflict continues to develop in the same direction and at the same rate, then it will be impossible for the U.S. political and business elite to hide. Protests by minority groups with very influential patrons in Congress are pushing toward such a situation.

But, paradoxically, it is the Trump team that holds the initiative, and the progression of the situation will depend on the behavior of the White House. We will see whether this will be a short war with a bright finale, or a series of long positional battles that will grow and subside, depending on the political calendar.

*Translator and editor’s note: Although accurately translated, the source of this quote could not be independently verified. In the article, the author writes after this quote that “a former spokesman for the White House issued this as a tweet.” Best efforts to verify this tweet led to a Politico article that stated, “Obama and his team are monitoring what’s happening at the White House and are not ruling out the possibility that Obama will challenge Trump more forcefully in the coming months, according to people who’ve been in contact with the former president.”