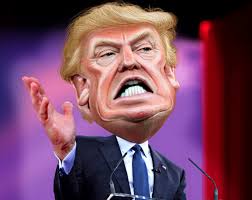 Saying anything positive about the carelessly coiffed solo entertainer in the White House is naturally difficult for most.

It is easy to demonize this freak that the Americans have elected to be president. Donald Trump has something for each and everyone in his portfolio. He is alternately embarrassing, ignorant, crude, sexist, chauvinistic, nationalistic, anti-democratic, xenophobic, racist, right radical, and besides, he still looks like the carelessly coiffed solo entertainer moderating the bingo afternoon in a senior citizen’s home for $10 an hour. Everyone in agreement so far? It’s a steal.

Most naturally find it somewhat more difficult to say anything positive about Trump. Granted, not much occurs to me either, aside from not being able to accuse the man of previously having left anyone in the dark about what kind of president he would be after elected. It would be at the very least naïve to ascribe qualities like honesty and principles to Trump.

Measured by the conventional criteria of politicians, Trump stands out because he at least gives the appearance of actually keeping his campaign promises. That he now and then tramples like a blunderer in the mud and is thwarted by the smooth political establishment might make him even more popular with his fans. They also elected him because he made no secret about his basic contempt for the ruling political class and their rules of play. A very small Italian entrepreneur also achieved election success with a similar plan.

Exactly as Silvio Berlusconi then, political profilers now certify that Trump has a craving for recognition and a narcissistic disorder. Strange accusations that take aim full throttle at nothing. What perhaps appears worthy of discussion in other careers is after all a necessary prerequisite in entertainment business politics. The same is true for the well-developed ability to create alternative realities. Trump achieves great mastery in this discipline. He is in a position to hallucinate about terror attacks at any time, for example, in Sweden. Or wiretapping actions by Obama à la Watergate. Presumably without knowing exactly where or what Watergate or Sweden actually are. Props.

If, however, Trump should flatter himself that he is a unique presidential phenomenon when it comes to imagination and creating reality, his hopefully better-informed doctors would have to delicately enlighten him. Other great statesmen have already carried it off brilliantly in this department long before Trump. Who, for example, doesn’t remember George W. Bush, who on the basis of obviously alternative facts, saw lots of weapons of mass destruction in Iraq? And, in fact, so clearly and distinctly that even the American press, so berated by Trump today as fake news, believed Bush’s every word.