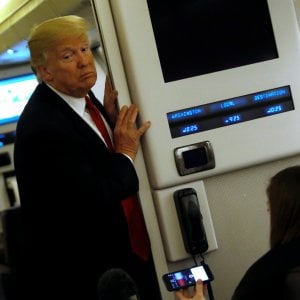 Trump has received a second slap in the face over the immigration ban, on top of many others he got over the wiretapping accusations against Obama and his barrage of boasts during his early days at the White House.

Yet another slap in the face for Donald Trump on the eve of the second “monthiversary” of a presidential term that already feels years long. A federal judge has imposed a restraining order on the “watered-down” second version of the immigration ban.

On Wednesday, that same day, two members of the House Intelligence Committee (one of them being Chairman David Nunes, Republican faithful and early Trump supporter) have publicly stated that they have found no evidence for the sensational and defamatory accusation of wiretapping in Trump Tower hurled against Obama in an absurd tweet. Another devoted supporter, Attorney General Jeff Sessions, replied with a strained, yet clear “no” to the same question about the heavy and unfounded accusation against the former president. In the meantime, the hyper-announced, endlessly boasted and eagerly awaited counter-reform of health care, i.e. of Obama’s health care law, thrashes and gasps for air like a fish caught in a net. It comes with the prospect of dropping 24 million Americans from health insurance coverage in exchange for a tax cut worth billions for the very rich. This makes the reform toxic to the point of being rejected, much like a child born "out of wedlock” in a novel from the 1800s, by Trump, who tries to blame it on House Speaker Paul Ryan, as well as by Ryan, who wants to dump it on Trump. In Congress, they call it “Trumpcare.” At the White House, they call it “Ryancare.”*

The balance of the first 60 days that started with a whirlwind of signatures and decrees as well as a storm of tweets posted at dawn in the solitude of Trump’s estate at Mar-a-Lago, is zero. Nothing but words, hot air, boasts. We no longer hear anything about the wall, which was supposed to be super high, super wonderful, and super well funded (by the Mexicans). The anti-Arab ban keeps getting torn to shreds by every court that examines it. A ban that was already ridiculous for excluding countries that were too important to anger such as Egypt and Saudi Arabia. Eventually, Trump may find a judge willing to approve it. In the meantime, shopping for a benevolent court is not making America look “weak” as he claimed yesterday at a rally in Tennessee. It only makes him look weak. Meanwhile, the investigation of the “Russian Connection” concerning the ties between his election campaign, Russian hackers, the new KGB and Moscow’s oligarchs keeps taking its toll.**

People are starting to tire of Trump's act of pulling rabbits and sequins from a hat in order to distract the public and the “fake news media”like a skilled illusionist. Were it not for the stock market’s robustness and the economy his predecessor left behind still producing 200,000 new jobs posted every month, these first 60 days would have been time wasted while searching for theatrical gags to charm snakes.

This would all be understandable, even normal for a man in his 70s who has arrived at the hardest job in the world without having had any government or political experience and without any idea of how “complicated" huge issues such as health care, taxes and budget plans are, the same budget plan he will soon have to present before Congress and which cannot be compressed into Twitter’s 140 characters.

In his place, a more mature man (which is not the same as being old), a president surrounded by advisers instead of shady Rasputin-like fawners indulging his most immature and narcissistic qualities, would study, reflect and learn. He would realize that he is not dealing with a one-hour TV show to be made into a hit, but rather with 300 days of government. He would realize that he cannot keep spending these days as if he were running an opposition election campaign or a reality show on pay television. Even the latest slap in the face over the immigration ban demonstrates that Trump has yet to realize that he is the president.

**Editor’s note: KGB is a reference to the former Russian secret police and intelligence agency.