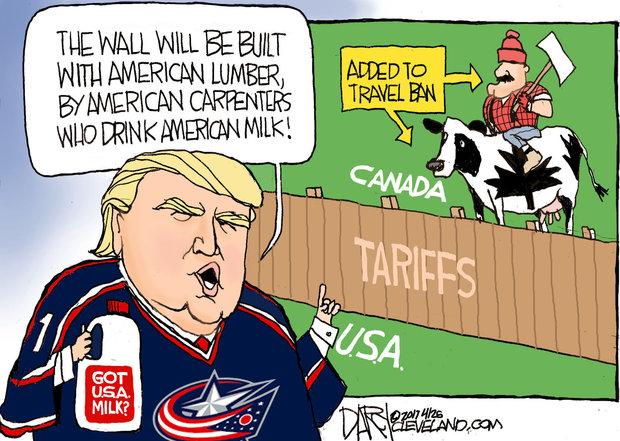 Washington is introducing another tax on timber imports. Canada tried to negotiate in vain. Trump had promised to challenge Mexico and China, but it is Canada that is taking the hit.

It is the fifth time in the last 30 years that the Americans are targeting Canadian timber wood exporters. Every time the conflict was brought in front of independent courts, Canada won, but at the cost of thousands of jobs in the meantime.

Despite losing so far, the American timber wood coalition continues to demand that their government re-introduce countervailing duties, which Washington never hesitates to do for political reasons. Because the timber industry does not recognize NAFTA and World Trade Organization tribunal decisions, Canada is forced to negotiate agreements outside of NAFTA, which obliges it to introduce quotas or impose taxes on itself in order to have some peace for the next few years.

Since the end of the last agreement of that sort, which was signed in 2006 and extended to 2015, Ottawa has tried to negotiate with the American industry, but its demands are so high that is has been impossible to come to an agreement. Yesterday, Quebec announced that it will put aside $300 million in loan guarantees to affected companies, especially for the smaller businesses that would have to make retroactive payments while waiting for a settlement.

For its part, Ottawa has merely denounced the American decision and has asked the Canadian industry to fall back on already-existing welfare programs; for example, employment insurance. In the future, China is relying on the export of Canadian wood; China, that dictatorship with which Justin Trudeau dreams of signing a free trade agreement, despite the lack of impartial courts.

Another issue that is the subject of repeated attacks by Donald Trump is milk. Yesterday, Trump signed another of his famous presidential decrees aimed at fighting its neighbor's protectionism while at the same time defending his own. In the short run, this will not change anything, but it is obvious that the Canadian way of supply management will be jeopardized during the next NAFTA negotiations.

Until last year, certain American producers profited from a flaw under NAFTA to export diafiltered milk intended for the production of cheese and yogurt.* This drove the Canadian industry to reduce the price of milk used for these types of products, much to the chagrin of the Americans who could no longer export their own.

But is it a reason to slash supply management? The Americans do not have access to the Canadian market for various milk products, but on the other hand, they also have to put up with Canadian competitors who are happy to produce only for their own market. In the end, the Americans have the advantage in the trade balance, contrary to what Trump says.

It is true that this way of limiting the production only to the owners of the local quotas while at the same time imposing tariffs of 250 percent on imports clashes with a free trade landscape. It is difficult for the UPA, and for Canada, to defend the closure of the borders for milk and poultry produced in other countries while at the same time demanding the complete opening of borders for our pork, timber wood and our maple syrup.**

In the medium term, it seems evident that milk and poultry producers could reform their system to make it more productive, more creative and more open to the world. From there to abolishing supply management is a big step, which will not be taken for a long time, as it could be followed by a repurchase of the production quotas and the annual payments of subsidies of tens of millions of dollars without price stability being guaranteed for the consumers.

During the presidential election campaign, Trump promised to get rid of the enormous commercial surpluses recorded by China and Mexico. Up until now, it is Canada that has had to pay the price for his politics despite a ridiculous commercial surplus of $3 billion last year, which is the equivalent of 1 1/2 trading days compared to the $380 billion surplus from the Chinese. Once again, the big liar (that is Trump) has voiced "alternative facts."

*Editor’s note: Diafiltration is an additional step in milk processing sometimes taken to achieve a higher protein concentration. Diafiltered milk is imported into Canada as an “ingredient” allowing it to enter tariff free.

**UPA stands for the Union des Producteurs Agricoles, an agricultural trade union representing producers in the Canadian province of Quebec.