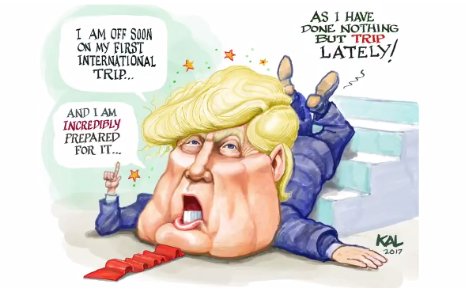 The mutual interdependence between the United States and the Saudi monarchy concerns profitable investments and the sale of military equipment that Riyadh needs.

Despite the many dilemmas President Trump is currently involved with in his domestic sphere, such as the dismissal of FBI Director James Comey and the consequent amplified suspicions that the president is hiding something serious regarding his relationship with Russia, Trump’s plan to make his first trip abroad within a week still stands. His first destination will be Saudi Arabia, where he will arrive on May 21. The importance of relations with Riyadh arises from many economic factors, such as strategic politics. The mutual interdependence between the U.S. and the Saudi monarchy concerns profitable investments, oil, security, the sale of sophisticated military equipment needed by Riyadh to protect its regional interests, and, last but not least, the open confrontation that both countries exhibit toward Iran.

Since his campaign, Trump has not stopped condemning the Group of 5 +1 agreement signed by his predecessor, in an effort to end the Iranian nuclear race, in exchange for lifting sanctions. Trump has always made it clear that for him, Iran continues to be an irreconcilable enemy and that the agreement was a mistake. And that’s without mentioning the hostility between Riyadh and Tehran, a maximum expression of the serious and prevalent conflict today between Sunni and Shiite Muslims.

The itinerary designed by the Saudis for the president’s visit consists of three events. First, a meeting with the king and his court, then a meeting with the leaders of the Council of Gulf Cooperation, and finally a session to which many leaders and high representatives of the Sunni Muslim world will be invited. Security and the war against terrorism will be presented as priority topics, but there is no doubt that during this visit, Trump will also try to ease the general Muslim resentment initiated by his intent to prohibit entry into the United States for citizens of seven Muslim majority countries.

Trump’s second stop will be Israel, where he will meet with Prime Minister Netanyahu, followed by a meeting in Bethlehem with the president of the Palestine Authority, Mahmoud Abbas. This destination reflects the interest Trump has shown in achieving an important triumph in foreign politics by solving the Israeli-Palestinian conflict. On this subject, the nervousness of the Israeli leadership is evident; during the American election campaign, Israel had predicted that the triumph of the Republican Party would ensure a continuance of its project for the expansion of the Israeli settlements in the West Bank. However, things have not turned out as Netanyahu and his allies predicted. Already, Trump has shown a more cautious position, cordially receiving and listening to Palestinian complaints during Abbas’ visit to Washington. In fact, Netanyahu was forced to order a temporary suspension of the construction of settlements, until he no longer required Trump to be available to endorse them.

The Vatican has been scheduled as the final stop on Trump’s trip. The visit to Pope Francis has, above all, a symbolic value, one that will show Trump’s solidarity with the world’s Christian flock, after having visited emblematic Islamic and Jewish places. Knowing the personality of Pope Francis, there is the question of whether the pope will merely be involved in a protocol meeting or if he will launch critical messages to President Trump, given his continuous transgression of human values that are firmly defended by the pope, such as those regarding the reception of refugees. Until now, Trump has categorically failed with domestic politics, and soon his problematic character, lack of experience, and tendency to lie and cheat will be known and similarly revealed in the field of international relations.