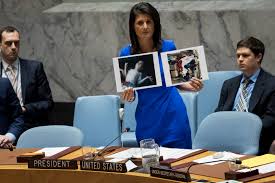 On her first visit to the United Nations European headquarters in Geneva, the new U.S. Ambassador Nikki Haley expressed heavy criticism of the composition and operating principles of the U.N. Human Rights Council and demanded reforms for the committee. Unlike Secretary of State Rex Tillerson and other members of the Trump administration over the past few weeks, the ambassador stopped short of threatening a U.S. withdrawal from the council, but she expressly kept the option open.

Haley demanded that human rights abusers no longer be allowed to sit on the council. To that end, Haley said, “the secret ballot must be replaced with open voting,” without predetermined candidates from regional blocs when the General Assembly in New York elects the 47 member nations.

In particular, Haley designated Syria, Iran, Cuba, Russia, China and Venezuela as “human rights abusers.” Because of the numerous deaths at anti-government protests in the past months, Venezuela should lose its seat in the Council, the diplomat demanded. It is “hard to accept” that the Human Rights Council has not condemned Venezuela yet, Haley said.

The same, however, is true for Saudi Arabia, the most important Arab ally of the U.S. in the Middle East. The U.S. and U.N have been holding their protective hand over the Wahhabi royal family’s dictatorship in Riyadh. More than any other government in the world, this dictatorship has violated the rights of women – ironically, the same women's rights Haley lauded as an especially great accomplishment.

The U.S. ambassador expressed no critical word about the status of human rights in NATO partner Turkey. On the other hand, she found fault with the frequency with which the U.N. Human Rights Council has condemned Israel. In so doing, she sugarcoated the illegal occupation of Palestinian areas by using the phrase “Israeli control.”

The U.S. ambassador denounced criticism of investments and businesses in occupied Palestinian areas (against international law) as “anti-Semitic.” In contrast to the eight years of the Obama administration, not one critical word from Haley was to be heard about human rights violations in or by the United States.