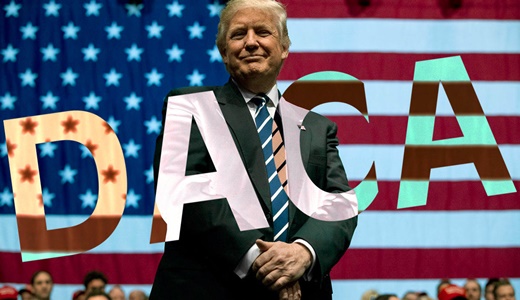 Tuesday in Washington, protesters expressed their opposition to the end of the program that has regularized the status of hundreds of thousands of young illegal immigrants.

Barack Obama is seeing red. On Facebook this week, he abandoned his usual reserve in order to denounce the declared end of the program that regularized the status of 800,000 young illegal immigrants.

He certainly cannot be reproached for taking part in this debate on such an important issue, especially as it was he who implemented the program in question in 2012.

Context: That year, the Democratic president offered young undocumented immigrants who arrived in the United States under the age of 16 the chance to receive, under certain conditions, a renewable two-year residence permit. Members of Congress had apparently tried, for more than a decade, to pass legislation on this issue − named the Dream Act, which is where the name “Dreamers” comes from. It was to no avail.

When the Democratic president signed an executive order to formalize the program, two-thirds of Americans were in favor of such a measure. Today, 76 percent of Americans believe that the “Dreamers” should be able to stay in the United States. According to a Politico poll carried out at the end of August and beginning of September, only 15 percent of Americans want these immigrants to be deported.

Public opinion in support of them is unsurprising. It is a matter of justice.

These young people, for the most part, bear the consequences of a decision made by their parents, over which they themselves had no control. Moreover, deporting them would have meant, in most cases, sending them to a country they have never lived in or haven’t lived in for quite some time, the language of which they may not necessarily even speak.

Over the years, these “Dreamers” have indisputably become Americans.

So, yes, Donald Trump’s decision is wrong, self-defeating − deportation of “Dreamers” would deprive the economy of $460 billion over 10 years, according to an analysis − and cruel. Especially since, in order to obtain their temporary resident permits, these immigrants must come out into the open. They’ve given their addresses to the American government, which could then use this information to deport them even more easily.

And the president, just like a perverse narcissist, isn’t even capable of taking responsibility for his decision. During the past 48 hours, he has continued to say that he has a “great love” for these “Dreamers.” Such hypocrisy!

Technically, he hasn’t closed the door on a new program aimed at regularizing the status of these young people. He has put the issue back in the hands of Congress, giving it six months to write a law. After this deadline, the program will be abolished.

But President Trump’s gamble and strategies are Machiavellian. It’s well known that members of Congress have very little chance of agreeing with each other and protecting the “Dreamers.”

American journalist Josh Marshall used a very good analogy to explain this strategy. It is as if Trump were pushing the “Dreamers” out of a plane flying at an altitude of 10,000 feet. He then yells to let them know he hopes they have a parachute … or hopes that congressional leaders can find one for them quickly.

Notice to the president: Attempting to camouflage this cruelty behind a veneer of compassion may manipulate part of the population, but it is an awful treachery.

76 percent: Americans who believe that the "Dreamers" should be allowed to stay in the country and become citizens or residents if they meet certain criteria.

15 percent: Americans who believe that the "Dreamers" should be deported.

26 percent: Trump voters who believe that the "Dreamers" should be deported.