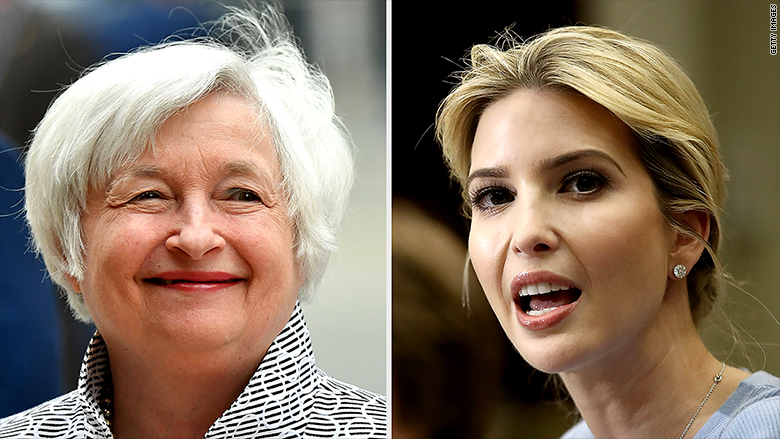 Ivanka Trump is the talk of the town. She occupies a privileged seat at the meetings that the president, her father, holds at the White House with the leaders of the corporate world. She fills the gap at international summits. And last summer she accomplished something almost impossible for the great figures in the financial world to do: have breakfast alone with Federal Reserve Board Chair Janet Yellen, who is, for many, the most powerful woman in the world.

The meeting took place last July 17 in the early morning in Washington. It lasted one hour. It was listed on the agenda published by the Federal Reserve, which is the United States’ central bank and the most powerful monetary authority on the planet. According to newspaper records, the meeting took place a week before Donald Trump commented that Yellen was doing her job well.

It is normal for the person holding the Fed chair post to meet with senior officials of the U.S. administration. This is done twice a month with the treasury secretary to address economic policy issues. What has surprised Wall Street is that Yellen has met with a member of the first family, who is not the president, and at a time of great tension in Washington.

Yellen's term ends at the end of next January. Trump severely criticized the Fed chair during the campaign, to the point of saying he wanted to see her out of the central bank because she was doing the Democrats a big favor with her policies. However, in the conversation with The Wall Street Journal, Trump made clear that the economist was in the running for a second term.

The chair should be dismissed this fall. Neither the Fed nor the White House gave details of the meeting. But even though they may seem like two sides of the same coin, both have a special interest in empowerment policies for women in public and private life. In May, Yellen devoted a speech to the participation of women in the economy, which Ivanka Trump quoted in one of her tweets.

It was, in fact, Ivanka Trump who contacted Yellen, who is double Ivanka’s age, after reading Yellen’s speech at Brown University. The young, 35-year-old businesswoman published a book last May dedicated to working women. She has also held meetings with the president of the World Bank and the secretary-general of the United Nations.

Yellen avoided making a statement on whether or not she would be interested in a second term. Tradition dictates that the new president keep the one chosen by his predecessor. Ronald Reagan did this with Paul Volcker, then Bill Clinton with Alan Greenspan, and most recently Barack Obama with Ben Bernanke, although the latter thought twice about it. Donald Trump is a very different political animal.

The meeting of Ivanka Trump and Yellen was known a week after the vice chairman of the Fed, Stanley Fischer, announced that he would leave his post within a month. Donald Trump has to cover, in addition, two other vacancies in the Fed governorships. So far, the person who has appeared most likely to be named chair is Gary Cohn, Trump’s chief economic adviser. But he is no longer ahead in the polls.