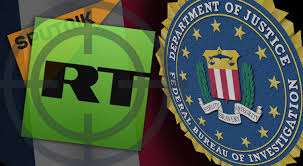 In recent months, debating about the origin of the degradation of Russian-American relations and analyzing the dynamics of this degradation have become a matter of habit. There are plenty of reasons, along with causes in the information realm, for such an undertaking. No sooner have the diplomatic battles over creating “ambassadorial parity” blown over than a new wave of battles threatens to overtake relations between the two countries. The U.S. Department of Justice has required the company that services the RT America channel to register as a foreign agent.

The Foreign Agents Registration Act, adopted in 1938 to combat the propaganda activities of pro-Nazi organizations, requires “agents” – “physical and legal persons representing the interests of foreign governments in a political or quasi-political capacity” – to disclose the nature of their relations with these governments, as well as the organizations’ sources of financial and internal data, including employees’ personal data and a list of staff. “Political activity,” according to the act, is understood as activity aimed at changing the position of the U.S. federal government or “any part of the population” regarding U.S. domestic or foreign policy or in relation to a foreign government or political party. To date, “social organizations” of religious, academic, scientific or artistic orientation, and the media – “at least 80 percent owned by American citizens and which are not under the control of other foreign agents” – have not fallen under the purview of the law. This “legal loophole,” as the Americans regard it, was used by the TV channel RT America.

Part of the RT network of TV stations, RT America, in operation since 2010, uses an independent, nonprofit organization in Moscow to finance its activity in the U.S., thereby setting itself apart from the Russian government. It is this status that allowed RT America to legally avoid the status of a foreign agent.

The initiative to include RT on a list of “foreign agents” is undoubtedly a symptom of a larger confrontational crisis in Russian-American relations. RT has long been strongly perceived in America and other countries of the West to be part of the “machine of Russian influence.” In combination with other elements like Russian hackers, social network bots, bribery and sleeper agents, this “machine” is supposedly capable of not only challenging the United States throughout the world but also destructively influencing the internal social and political stability of America – of which the 2016 U.S. presidential election is evidence. It is this “explanatory framework” that today dictates the decision-making process in Washington at the level of both the executive and legislative branches.

The processes of detecting and eliminating “Russian influence” have become the main task at virtually all levels of the American government. And particularly close attention is given to the information realm, in terms of both communication and technology. The first round of Senate hearings with executives of the leading social networks Facebook and Twitter, in which these very issues were discussed, just took place. In assessing this threat, as in the modern information realm on the whole, elements of perception have long since blended with reality. Against this backdrop, it was easy for the Counterintelligence Section of the U.S. Department of Justice’s National Security Division, which is responsible for implementing FARA, to argue the purpose of its initiative against RT – to shield the American viewer from this information threat.

In Moscow, this step is regarded as exceptionally discriminatory, with the Kremlin pointing out the fact that, with the exception of the Japanese TV channel NHK, the law on foreign agents has not been applied to any other foreign media operating in the U.S. – including Chinese TV channels. The assessment of RT’s influence on its American audience is blown way out of proportion, but that’s not so important with respect to a political decision. Criticism of RT’s “professional ethics” is also of little relevance in a political sense – the criticism is hardly directed at upholding “professional standards of quality.” Designed for the domestic man on the street, it’s most likely an element of the same fight for “hearts and minds” in the information realm. The essence of this confrontation doesn’t boil down to “the TV channel’s direct ties to the Kremlin,” though in the U.S., that in itself is already a sufficient basis for treating RT with a heightened level of criticism. The claim of an “alternative position,” embodied by an in-demand, brand name information product, came seriously to be seen as a dangerous attempt to take away the truth from those who considered themselves its rightful owners.

In the U.S., there are many who don’t welcome this initiative. Not because they feel bad for RT – as far as that goes, there’s nearly complete consensus in Washington. One group of critics points out that such a step is worrisome from the point of view of press freedom in the U.S. – “Yes, RT is Russian propaganda, but even they should have a platform to express their opinion.” Another group cautions against including RT on a list of foreign agents out of fear for the fate of American media companies, of which there are many times more in Russia. Russia’s practice of asymmetric responses in recent years leaves no doubt that if the FARA initiative is implemented with respect to RT and Sputnik, Moscow will go down that path. The losers in this fight, as is usually the case, will be Russian-American relations.