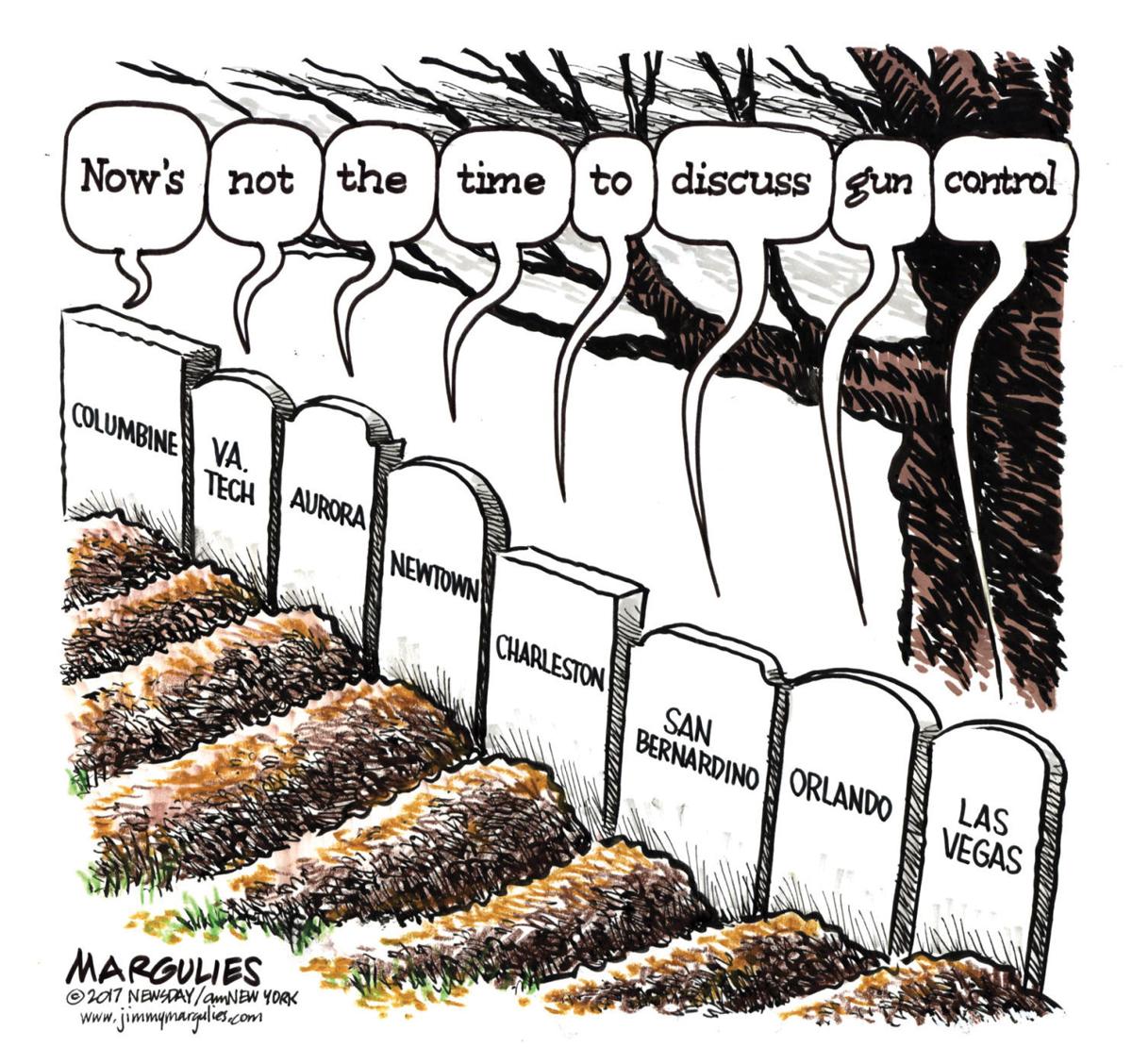 The massacre in Las Vegas has unleashed a new discussion about weapons in the U.S. Yet it will lead to nothing, because in order to tackle the topic meaningfully, Americans would need to accept uncomfortable insights.

Even Sarah Huckabee Sanders, the White House press secretary, struggled to maintain her composure. As she called some of the victims of the Las Vegas massacre by name, tears came to her eyes. Yet her compassion ended at the question about consequences. “There’s a time and place for a political debate,” she said. The time is not now, however, but instead, well, another time.

But when, please? When the dead have been buried? At the next mass shooting? When people have long since forgotten the horror that occurred in Las Vegas? What would motivate people to act together if not the death of dozens of people?

The sad answer: This time will likely never come in the United States. Twenty children and seven teachers died at Sandy Hook Elementary School in Connecticut in 2012. Nothing happened. Forty-nine disco patrons, many of them gays and lesbians, died last year in the Latino night club “Pulse” in Orlando. Nothing happened. Six people were injured at a congressmen’s baseball practice, among them Republican Rep. Steve Scalise. Nothing happened.

Nothing will happen as long as the Americans do not recognize how hypocritical the debate is.

“The answers do not come easy,”said President Donald Trump. At the same time, the answers are obvious. Some 313,000 deaths by firearms in 10 years. More than 1,500 mass shootings since Sandy Hook. The laxest gun control laws in the Western world. No other country has such statistics. No other country would have it so easy to change something.

Instead, people give in to rituals again and again, on both sides. Flags at half-mast, candlelight vigils, moments of silence, darkened skyscrapers, the life stories of the victims and the heroic deeds of the rescuers. The U.S. media are now already starting with it.

These are moments that briefly unite the country in pain, but the unity ends with the weapons. And that cannot be discussed without the discussion immediately being reduced to reflexes that stifle any significance. Pro versus contra, Republican versus Democrat, friend of weapons versus enemy of weapons. Those who profit from it politically only inflame it: Hillary Clinton, Trump lied during the election campaign, wants to take all firearms away from Americans. “Lock her up!“ his supporters chanted.

Yet the topic is so much more complex. However, to tackle it meaningfully, Americans must accept uncomfortable insights:

• First, the conclusion that the weapons debate is shaped racially. Firearms were always first and foremost a white privilege. The Ku Klux Klan also came into being to confiscate weapons from black people. As of today, the National Rifle Association, the U.S. gun lobby, is predominantly white – and whites are often the only ones who can, in practice, claim the Constitution’s Second Amendment right – the general right to bear arms.* Armed black people and religious minorities, on the other hand, are often considered “thugs” and “terrorists;”

• The insight that their “Christian” fellow countrymen are statistically a greater threat to America than Islamic fanatics. But instead of speaking openly about this – often right-wing radical – “domestic terrorism,” the president prefers to ban the immigration of Muslims;

• The insight that the NRA does not represent citizens, but is instead the lobbyist for the arms industry. Their henchmen are conservative politicians, who, paid with contributions, keep the laws lax. This week, they want to discuss a law that would make it easier to purchase silencers out of consideration for the hearing of shooters. It was postponed after the baseball practice assassination attempt, and is likely to wait until the participation of their colleague Scalise, who returned Thursday, limping into the House chamber;

• The insight that that stricter laws alone are not enough. Yet the causes of gun violence – terror, psychological problems, the breakdown of the family, America’s class system, growing hate between all – appear to be just as taboo as more resourceful ideas like “smart guns.” Besides, Congress is cutting research finds for that;

• The further insight that Democrats seldom change their spots. They complain about the status quo, but even in Las Vegas, they cannot find the courage to be courageous, but instead leave it at platitudes. “Las Vegas is a safe place,” said Steve Sisolak, Democratic chairman of the Clark County Commission, on Monday evening. “We encourage everyone to visit us.”**

Quite a few firearms fans will be present among the next visitors. Already this coming weekend, the Western Trails Gun and Knife Show is taking place in the Eastside Cannery casino. It’s two days long, with thousands of rifles, pistols, knives and other weapons. Admission: $12 a person.