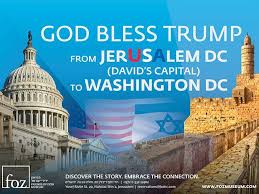 Who supported Donald Trump when he announced that the United States would regard Jerusalem as the capital of Israel? Evangelical Christians in the U.S. and Zionists. Evangelical Christians are stupid, they believe the myths in the Torah about Israel, which only ever existed in dreams. Zionists are all "Shylocks," and Trump is their agent, ever since Trump won their support in his presidential campaign.

The Palestinian thinker Mazin Qumsiyeh wrote a valuable article on the issue, and he described Trump's decision as the "last paper" that will affect the whole world, especially in the Near East, in a way that will make it inconvenient for the Zionists that control the Trump administration.

From here, I read what has been published by the Israel gang in the United States: their filthy thoughts and lies. They say that the Muslim Brotherhood has declared war on America. Well, the Muslim Brotherhood is on the road to political [ruin], and if they described the United States as an "enemy state," this is the opinion of the vast majority of Arabs and Muslims.

I am not a supporter of the Muslim Brotherhood either today or any other day. However, I say that they are taking advantage of the opportunity to express the feelings of all Arabs and Muslims and students of truth around the world. The Israel gang has the audacity to allege that Trump's decision on Jerusalem strikes a blow against terrorism. The fact is that Trump's decision just gave terrorists another very clear excuse to continue on the path of terrorism. I hope to live to see terrorism defeated – including al-Qaida, the Islamic State, Ansar Beit al-Maqdis, and others – along with the government of Israel and the army of occupation and settlers. Israeli terrorism is the first terrorism in the Middle East – the terrorism from which all other terrorism springs.

The supporters of Israel have claimed in another article that Trump offered Israel the greatest gift in announcing Jerusalem as their capital, 68 years after its establishment. The first and only Jerusalem is East Jerusalem – the entirety of which is the capital of Palestine. What the Jewish invaders have called Jerusalem is a group of Jerusalem neighborhoods, where there are no traces of the original or authentic Jerusalem: The Church of the Holy Sepulchre, the Al-Aqsa Mosque, and the Umar Mosque. Where is the third temple? Where are the first and second? There are no traces of these myths on the ground through which to establish them.

The Israel gang attacked activist Huma Abedin in a new article claiming that she lied to the FBI and was not held to account. They insist that Hillary Clinton committed crimes by using a personal email account. The way I see it, the only political crimes were committed by the supporters of Israel and the U.S. administration, and then other crimes were committed by the government of Israel when it killed millions of Palestinian children along with their families. I say that the shoe of Huma Abedin is nobler than all of the Israel gang, the group as a whole, or any members therein.

The audacity of the gang knows no limit. They have written about former National Security Advisor Michael Flynn, who pleaded guilty to lying to the FBI and confirmed his relationship with Russia to special counsel Robert Mueller. If Flynn lied, he did it in service to the campaign of his president, Donald Trump, as the relationship of the president with Russia as a businessman is wellconfirmed and cannot be denied. So the investigation ends with Trump unscathed, and the Israel gang around him.

They claimed that Iran and Hamas are testing Israel’s ability to deal with them. The whole world against Israel. So I welcome the mass boycott of South Africa and their sanctions and withdrawal of investments. It now seems that the gang is trying to shift attention away from Israel's daily crimes and its terrorist prime minister, Benjamin Netanyahu.

The oddest thing I've read lately is that Israel is celebrating the 40th anniversary of the visit of President Anwar Sadat to Jerusalem. The Egyptian president was the hero of the 1973 Arab–Israeli War; he made the mistake of visiting Jerusalem and paid the price for that with his life. As much as I opposed him, I never wished he would die. But the original terrorist is Israel and resistance is required.