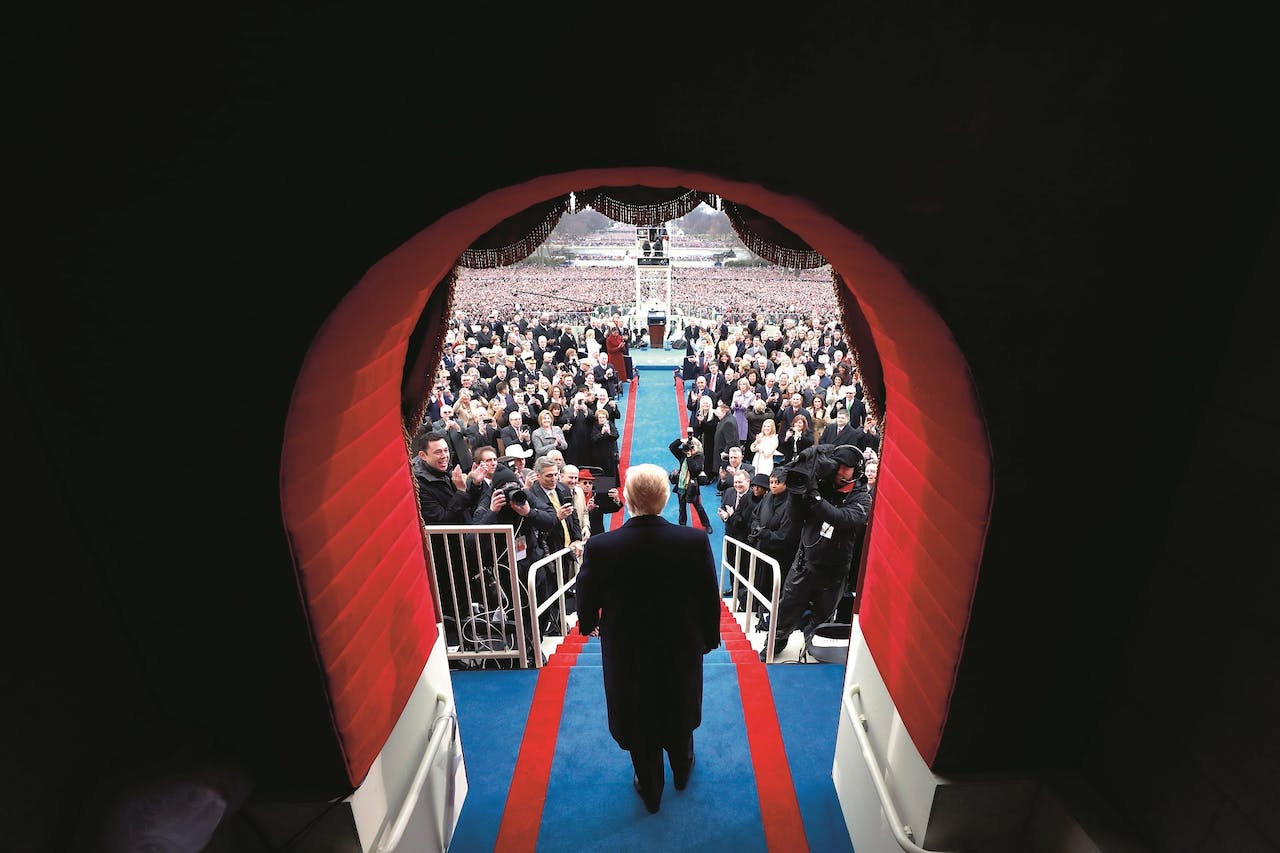 Author Philip Huff is from the Netherlands and lives in the United States: an excellent position to look back on Trump’s first year. And guess what? The delusion in the White House masks real scandals for which everyone is responsible. The Netherlands are no stranger to those scandals either.

I have lived in New York, in downtown Manhattan, for almost three years now, next to the Lower East Side and Chinatown. The Lower East Side and Chinatown are two of the more impoverished neighborhoods in Manhattan, but the favorite destinations of many of my visiting Dutch friends; Soho, Tribeca and the West Village, with their flagship stores and apartments inhabited by celebrities, are close by. And the hipster neighborhood of Williamsburg, also a beloved place, is on the other side of the water. I lived in Williamsburg for a while as well, bordering the poorer part of the quarter. The whole neighborhood was under construction; apartment buildings for the young, healthy and affluent new neighbors popped up everywhere. The difference between the area outside of Williamsburg and the area inside of Williamsburg was significant: In one part, homeless people slept on the sidewalk underneath scaffolding; in the other part, the restaurants were good, the bars cozy and the apartments beautiful and filled with those young, healthy and affluent residents who, with their preference for beautiful things, were the ideal Amazon customers. The connection between the cardboard boxes under which the homeless slept and the boxes filled with orders was alienating. But the most alienating thing was how quickly I got used to it. One person’s flat screen box is another person’s house.

There is much ado about the president in this country. Every day reveals a new scandal: how he took money collected for children with cancer from his son’s charity and pumps it into his own companies (reported in Forbes this summer), how Special Counsel Robert Mueller indicted Trump’s former campaign manager for conspiracy against the United States (take a moment to consider this), and how one travel ban has less legal basis than another but causes a spike in hate crimes. Recently, Trump enacted a disastrous tax plan. It is clear: as a president, Trump is a disaster.

For me, the disillusion was already complete when the videotape emerged on which he said that he grabs women by the pussy — “When you’re a star, they let you do it” — and he barely dropped in the polls. Just like the shooting at Sandy Hook in 2012 showed the moral bankruptcy of the weapons debate in this country — 20 dead children, 6 and 7 years old — that recording proved you can get away with almost everything here when you are a white man, born into prosperity, with a big mouth, and even when you are incapable of doing anything. Trump is the son of a billionaire and is a real estate tycoon. The National Journal calculated last year in an article that if, when his father died, Trump would have invested his assets in a fund that followed the Standard and Poor’s 500 market index, he would have had $8 billion instead of the $3 billion he claims to have. (We are still waiting for his tax returns to support that statement.) So he has performed worse than the market, while his supporters praise him as a successful businessman.

If you want to know how badly a country is doing, you only have to check which social problems it resigns itself to: ideas about success and masculinity, ideas about the free possession of weapons and the cover-up of structural, institutionalized racism. Because don’t be mistaken: the United States constitutes a class society, and those classes are often connected to race. The social mobility of citizens has stagnated for years already, except for some zip codes, and those “successful” zip codes are inhabited, above average, by rich white people, with, yes, a big mouth. In turn, they let themselves be represented by another rich white man with a big mouth, albeit not too big. The comedian Bill Hicks performed a parody in the ‘90s in which a recently inaugurated president gets invited to a meeting in a skyscraper in New York. He takes the elevator to the top floor. There he finds old white men around a table, cigars in hand or mouth. A screen is lowered. It shows the murder of John F. Kennedy — a man who was, for his time, an emancipatory, progressive president — from an angle no one has seen before. “Any questions?” one of them says when the screen is lifted. “Just one,” says the new president. “What is my policy?”

With Trump, this kind of political puppet and political puppet masters seem to coincide for the first time. Those who live long enough in the United States start to believe in a group of despotic, evil billionaires who have the angry white politician in their power. This is not only because of day-to-day business, or because of the daily business of election campaigns or because of the structural power of the industry in America, but also because of books such as “Dark Money,” “Clinton Cash,” and “Nation on the Take.” They are cold analyses of the far-reaching influence of the plutocracy in America.

Of course, this is a country of extremes, but know this: Everything that happens in the United States also happens in the Netherlands. And of course, Trump’s scandals are American presidential scandals, scandals on a double portion of steroids: about kids with cancer, about harassment and racism, and about a case that smells like high treason. In the Netherlands, it is about the real estate portfolio of the royal family, about the lack of women in the third Rutte government or the side jobs of party leaders. But the real scandals in the daily life of America, the scandals for which you are responsible as a resident of this country even without voting rights, are the much smaller scandals, the scandals that also take place in the Netherlands: neighbors who sleep underneath your old pizza boxes, shrugging your shoulders about ethnic profiling, the distance between you and your fellow countrymen on the basis of race and income.

To object and say that this is not your responsibility brings with it a useless self-hatred, which actually hinders every change; suggesting that individual interests cannot always be aligned with the common good, or that the common good does not even exist, does not change anything about this fact. Those who ignore the social-economic reality of America engage in self-deception, self-justification or reconciliation with the status quo. Such an attitude contributes to the preservation or even enhancement of reigning injustice.

And this brings us automatically back to the president of this country. The facts that he cannot listen, lacks self-awareness, and only has an eye for himself and big money have become platitudes. It is terrifying to notice how quickly you get used to that, and how difficult it is to remain combative and to not resign oneself to the issues of the day. But it is even more difficult to keep recognizing what the true madness is — as it is also in the Netherlands.