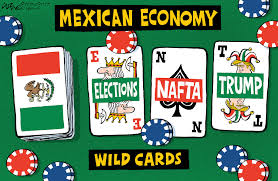 The unanswered question of whether Mexico will continue to rely on NAFTA to place its products in duty-free markets generates more speculation than realistic responses. A final answer will come from the decisions made in the three capitals involved. There are various possibilities. The first of these, disconnecting our economy from NAFTA, would lead to a long complicated process of designing formulas for regional coordination that would have less drastic results than a simple break. This way, our country would stay connected to some regional plan.

The concerns in Mexico about the complete disappearance of NAFTA resemble those that stood out in the United Kingdom before the strange popular decision that led to Brexit. Even at this late hour, that country has groups shaped by prominent personalities trying to salvage even some of the advantages and preferences that they enjoyed as members of the European Union.

There are those in Mexico who are relatively certain that our exports will continue to have easy access to the North American market whether NAFTA remains – in spite of firm personal opposition from President Trump – or through another negotiable route. Possible alternatives to the current treaty are the revival of the Trans-Pacific Partnership, still sidelined in the ministries of various countries including ours, and the expansion of the thriving Pacific Alliance, which we founded with Chile, Peru and Columbia, and which plans to extend to Asia.

The trade associations in development, such as the great Chinese program to link the confines of Eurasia, hold prospects yet to be presented. In this regard, the numerous treaties of all kinds that we have signed over the past years will be extremely useful. The most modest option would be to abide by the regulations of the World Trade Organization, which would become strengthened by transferring the operations of NAFTA. If our foreign trade is relatively secure, included or not in some regional organization, this does not resolve the weakness in our foreign trade, particularly in the manufacturing sector, which generates a problematic deficit.

It has been stated and repeated for decades that the fact that foreign components continue to contribute a high percentage of what we produce and then export reduces the taxable value of these goods for Mexico. This leaves millions of Mexicans in the agro-industry and in manufacturing without work and without real prospects for a life with dignity.

The strong dependency of our economy on the automotive sector reminds us that our pre-eminent position among the world’s car manufacturers does not mean that sector is ours or that the decisions in this area are made by Mexicans mindful of our economic interests. All of the ownership and decisions in that industry are foreign. The number of automotive plants grows without accepting the obvious convenience of having Mexican partners.

There is much to do in this and many other areas of national development. We all know it.

Our previews of 2018 confirm that it is full of challenges that those who seek to occupy the presidential seat of the Republic will have to resolve frequently in lightning interviews. They will not be able to respond superficially. The tone and text of each of these answers will be noted and processed by national analysts and by foreign professional observers.

The candidates’ answers must be realistic and practical. These will determine the tone and seriousness of the answers that will be deposited in ballot boxes in the middle of the year.