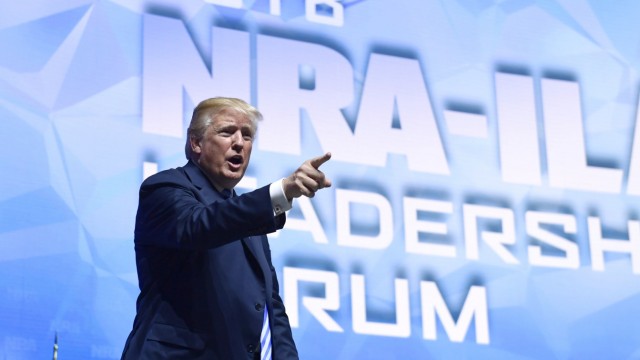 In his appearance before the powerful U.S. gun lobby, the NRA, Trump makes loud and clear what he thinks is best for the country: even more guns.

Donald Trump lets page after page of papers fall to the floor as if they were trash. They are printouts of news articles that were making the rounds shortly before the beginning of his speech at the annual meeting of the National Rifle Association in Dallas. In one, a judge in the state of Virginia had reprimanded the special counsel in the Russia scandal, Robert Mueller. If he puts Trump’s former campaign manager Paul Manafort on trial to induce him to make statements against Trump, then Mueller is overstepping his jurisdiction.

Trump reads it all out loud, line by line. Apparently, it's an article from the news channel CNN. Trump only calls the channel “Fake News CNN.” He seems blind to the irony of it. The news doesn’t seem to have been so fake this time.

It doesn’t even take 10 minutes for Trump to let the teleprompter go and ramble freely about the “witch hunt” that is in progress against him, led by the Democrats and even Mueller. At the same time, there was no collaboration with Russia to win the election in 2016; Trump asserts that again and again. It is indeed Mueller’s job to confirm that. Or just to prove the opposite.

Trump is cheered in the Kay Bailey Hutchison Convention Center in Dallas. He can feel at home here. He supports the NRA; the NRA supports him. When Chris Cox, head of the political arm of the NRA, announces the president, it doesn’t even sound like this is an NRA convention, but rather a Republican one.

The NRA Strongly Supported Trump in the Election

It is hard to believe that in November, we will mark the second anniversary of the day Trump defeated Democrat Hillary Clinton, Cox exclaims. “If that isn’t a reason to celebrate!”* he stirs up the crowd.

He likely also has to defend the investment that the NRA made in Trump and the Republicans. The NRA spent well over $30 million on Trump’s presidential campaign. His election victory is also, to some extent, the election victory of the NRA.

After the shooting rampage that left 17 dead at Marjory Stoneman Douglas High School in Parkland, Florida, on Feb. 14, it certainly appeared for a few weeks as if Trump would seriously dare to do something that would not receive the blessing of the NRA — like a ban on certain assault weapons such the AR-15, used by the perpetrator in Parkland as well as the shooter in Las Vegas (59 dead). Or at least age limits for those firearms.

The pressure was great. Hundreds of thousands of students throughout the entire country have demonstrated since then for stricter gun laws. In the end, little happened. Trump merely let the so-called bump stocks, a plastic attachment that effectively turns semi-automatic weapons into fully automatic ones, be banned. However, that was the harshest new regulation.

Nothing else stood in the way of the appearance in Dallas this Friday. And, of course, Trump again affirmed the Second Amendment, which in the eyes of the NRA, describes the God-given right to bear arms.** The gun lobby means that literally. Today it is more of a sect than an interest group.

Trump needs the NRA and its 5 million members. All of them are potential Trump voters. And in the fall, the important midterm elections will take place. The Republicans could lose their majority in the House of Representatives and the Senate. If that happens, Trump has as good as failed politically.

It is already difficult enough to push through new laws with the narrow majority in the Senate, but if the majority in even one of the two chambers goes to the Democrats, Trump will neither be able to build his wall with Mexico nor start any other larger project without bringing the Democrats on board.

With Guns Against Gun Violence

His speech at the yearly meeting of the NRA is primarily one thing: a campaign appearance. One in which he validates the worldview of the NRA supporters wherever possible. Fewer guns make the world safer? Nonsense: Only more guns bring more security.

Of all things, he uses the terror attack in the concert hall Bataclan in Paris as an example. France has very strict gun laws. No one there has a gun. If just one of the concertgoers had had just one gun, the story would have been “a whole different story,” Trump believes. Then 130 people would not have died in the concert hall and vicinity.

Seen thus, Trump may have found himself in an extremely precarious location here in Dallas. Carrying weapons of any kind was forbidden during his speech.

Trump thinks that more weapons would also help in the U.S. Therefore, he wants to arm teachers in order to protect their students. His simple logic: The attackers are all cowards. If they knew there were weapons in schools then they wouldn’t enter. “You're not going to have school attacks,” Trump believes. And, judging by the applause, the NRA supporters believe that, too.

What doesn’t come up for discussion: Since the school massacre at Sandy Hook Elementary School in Connecticut in December 2012 to the middle of this March, 7,000 children in the U.S. have been killed with guns. Those are more victims than the 6,929 U.S. soldiers who have lost their lives in battle since 9/11.

The rest is a Trump advertising campaign. Unemployment rates, tax cuts, North Korea, a new conservative judge in the Supreme Court, the highest court in the U.S., everything is a huge success, if only it weren’t for Special Counsel Robert Mueller’s “witch hunt.” That is Trump’s message for this day: He has achieved more than any president ever before in the same amount of time, but the alleged witch hunt is preventing his successes from being discussed..

What he forgets to mention: The one who is speaking the most about Mueller and the Russia investigation is Trump himself. A look at his Twitter timeline suffices.

*Editor's note: While accurately translated, this quote could not be sourced.

**Editor's note: The Second Amendment provides: "A well regulated Militia, being necessary to the security of a free State, the right of the people to keep and bear Arms, shall not be infringed."