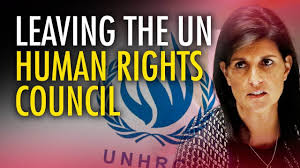 The U.S. withdrawal from the U.N. Human Rights Council is a new blow — to the United States.

Donald Trump’s administration continues to wreak havoc on the world order in the name of the fight against “hypocrisy.” On Tuesday, it was the Geneva-based U.N. Human Rights Council’s turn: it was just a den of dictators and a barely disguised way to systematically attack Israeli democracy, he claimed. The U.S. is withdrawing, as it previously withdrew from the Paris climate agreement and the Iran nuclear deal.

Once again, this decision calls into question the role the American president wants his country to play in the world. After all, it was the United States itself that did the most to create this international architecture that it is now working to dismantle. It is this order that, up to now, has guaranteed that the American superpower maintains its status. It is almost as if President Trump was enthusiastically and deliberately destroying his bespoke suit, to then proudly display his rags.

Is the HRC problematic? Are its results so imperfect that it qualifies as one of the worst regimes on the planet? It is at least as imperfect, and often as hopeless, as the planet this council reflects. The debate over the HRC is as old as the institution itself, but the current American actions would be more convincing if they were consistent. Recently, Trump gave the impression of being more at ease with Kim Jong Un than with Angela Merkel. He seems to have more affinity with Filipino despot Rodrigo Duterte than with the “dishonest and weak” Canadian prime minister, Justin Trudeau. The U.S. today is providing a lot of work for the U.N. High Commissioner for Human Rights: it is a country that separates children, including babies, from their parents, and imprisons them in specially designed metal cages.

Moreover, the allegedly anti-Israeli obsession of the Geneva Human Rights Council has been responding for decades to its counterpart in New York. At the U.N. Security Council, the United States has used its veto power 44 times to defend Israel’s interests. But the movement intensified only recently when, mocking the rest of the world, Ambassador Nikki Haley justified the recognition of Jerusalem as the capital of the Hebrew state and the killing of dozens of Palestinians in Gaza.

More than a struggle for greater respect for human rights, the American decision clearly stands as further evidence of the Trump administration’s alignment with Israeli positions. An Israeli state that, according to the opinions of former military, judges and human rights activists, seems to be straying from its image as “the only democracy in the Middle East.”

The United States, like Israel, is said to dream of an HRC that would be reserved for “deserving” countries. But it’s yet to be seen whether these two countries, acting as they do today, would find a legitimate and undisputed place there.