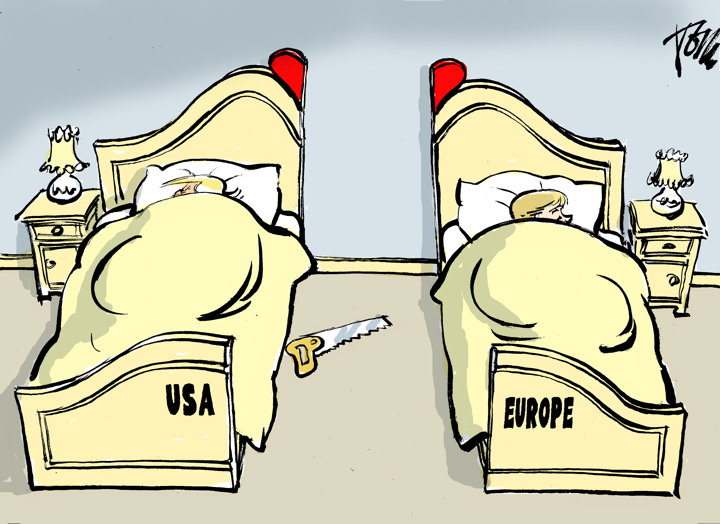 The extent of the crisis in relations between the U.S. and Europe has, frankly, never been seen before in recorded history.

“… We must be ready to prepare our Union for worst-case scenarios,” European Union President Donald Tusk of Poland warned EU leaders on June 27 before the EU Council meetings, describing the considerable tension with the United States, led by President Donald Trump.

Trump refused to sign the communique in indignation over Europe and Canada’s criticism and left the Group of Seven leading industrial nations Charlevoix summit early. Because of his arrogance, cracks in the postwar alliance of 70 years are turning into fractures that are difficult to repair.

What is the “worst” for which Tusk is preparing? I think that the United States’ deteriorating relationship with Europe coincides with the complex situation arising from the Trump administration’s splitting the framework of the super state of the European Union.

A former White House official, who recently visited Berlin and Munich, said that Germany’s feelings toward the U.S. have deteriorated even more than during the George W. Bush era, and that the more serious issue is that the U.S. does not care.

Here is a straightforward example. Richard Grenell, who was appointed U.S ambassador to Germany by Trump, assumed office in May. After the U.S. ignored Europe’s opposition and withdrew from the agreed-upon Iran nuclear agreement, Grenell immediately tweeted, “German companies doing business in Iran should wind down operations immediately.”

This ambassador emulates the Trump-style technique of sending a commanding message with his fingers. In the right-leaning media in the U.S., Grenell praised Austrian Chancellor Sebastian Kurz – who established a government that includes the extreme right – as a “rock star.” He also said, “I absolutely want to empower other conservatives throughout Europe … ”

U.S.-Europe relations have declined since 2003, when Germany and France refused to participate in the Iraq War brought about by the Bush administration. At that time, the U.S. Congress renamed french fries, “freedom fries,” and the secretary of defense criticized Germany and France as “old Europe.” Even so, values such as free trade and multilateralism could be shared then.

The Trump administration does not even consider those values, instead it upends the traditional order by resolutely moving toward the path of “America First.” Specifically, there are three unprecedented kinds of pressure that are being applied to Germany, Europe’s representative.

The first is, of course, confrontation over trade. This development escalates the friction that started with the restriction on imports brought about by tariffs in the automobile sector, which is the main trade issue.

Since Trump’s inauguration, he has repeatedly expressed his dissatisfaction with the influx of German cars, saying that Mercedes and BMW cars crowd Fifth Avenue. When the EU introduced retributive tariffs, Trump claimed in a tweet that, “if these Tariffs and Barriers are not soon broken down and removed, we will be placing a 20 percent Tariff on all of their cars coming into the U.S.” Germany will take the greatest hit.

The second is security. Germany’s defense expenditures for NATO do not exceed 1 percent of its gross domestic product. Trump has repeatedly criticized the “too light burden” of Germany, which falls far below the approximately 3.5 percent contribution of the U.S. Within the EU as well, there is discontent that Germany’s burden is small. If the leaders of the U.S. and Europe repeat the disorder of the G-7 meeting at the NATO summit in mid-July, then a rift could open that would be difficult to bridge.*

The third is the immigration issue. “The people of Germany are turning against their leadership as migration is rocking the already tenuous Berlin coalition,” Trump tweeted on June 18, emphasizing the “mistakes” in the Angela Merkel administration’s immigration policy, while it is in the critical stage of preserving itself against criticism of being weak, heard from other parties who were preparing for local elections. Trump has also spoken on the phone with Hungarian Prime Minister Viktor Orban, who leads an anti-immigration and authoritarian administration, openly shaking up the EU with his immigration policy.

Trump hates multilateralism and aims for one-on-one transactions. His recent activity has disrupted the framework of the EU and shows that he intends to acquire an advantageous position through his actions concerning trade and security. Countries that comply with the demand of “America First” will be favored. Countries that do not will be pressured in order to demonstrate dominance. The U.S. administration’s new diplomacy is becoming the normal state of the world.

Even within its isolated status as the "G-6 +1" at the G-7 summit,** the United States acts in its own national interest. It is meaningless for the international community only to grieve over the Trump administration, which does whatever it wants. It is urgent to rethink strategy to overcome difficulties.

It is only natural that countries with shared interests must band together to firmly object to and deny the repeated and unreasonable demands of President Trump, who ignores multilateral rules. At the same time, we need to be watchful for the change of feelings in U.S. society that brought about the Trump administration.

President Trump’s criticism of Europe pinpoints the core of the problem with the Western Alliance. Jochen Bittner of the German newspaper Die Zeit expanded on this discussion in The New York Times on June 20, writing, “America feels this loss of balance the hardest — it has always spent the most money and manpower to keep the system working.” He hit on the issue that Europe has enjoyed a “free ride,” brushing off defense spending while making universities free of charge and implementing free medical care.

Natural concepts such as liberalism and Western democracy are simultaneously being reaffirmed. What burdens should Japan, which is dependent on the U.S. for security, take on, and what should it contribute to global-scale solutions? Now that Europe has started to assume this worst-case scenario will occur, Japan and Europe should together take a second look at how to face the United States.

*Editor’s note: The meeting of NATO heads of state and government was held on July 11 and July 12 in Brussels, Belgium.

**Editor’s note: G6+1 refers to the United States' perceived self-imposed isolation from the other G-7 nations due to its imposition of tariffs.