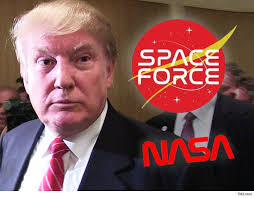 If America has a president the mainstream left can’t stand, then everything the head of state does is initially mocked and disparaged. That was illustrated by Ronald Reagan, a man who regarded as immoral the Cold War principle of balance of terror. He gave that idea a good scolding on March 23, 1983, when he called on the “scientific community who gave us nuclear weapons … to give us the means of rendering these nuclear weapons impotent and obsolete.” The derogatory expression “Star Wars” was coined in derision of his Strategic Defense Initiative proposal, even though it did contribute directly to the “disarmament” of the Soviet Union.

Now Donald Trump’s America has announced the creation of space troops. You can guess. Who’ll be the first in the U.S. to condemn it? What mocking label will they give it? “Star Wars” once again? Factually that would be nonsense. Reagan’s “Star Wars” has nothing in common with Trump’s “space troops,” other than the fact that flocks of emotionally repressed Trump-bashers are waiting for the opportunity to disparage and ridicule the president. So we’ll see.

All Trump’s “space force” portends is that space activity will transition from Air Force oversight to its own command structure. And one more thing: The main rival now is not Russia but China. That’s important. But it doesn’t change the technology of space flights one bit.

Whereas Reagan’s “Star Wars” was intended to disrupt a fundamental feature of the Cold War − the fact that defensive instruments were restricted more than offensive ones in order to maintain the balance of terror and the fear of mutual destruction − the term “cold war” today is used hyperbolically. If you want to test whether it’s substantiated, then look at Moscow’s reaction. Or how Moscow reacted to the defensive radar which was supposed to have been placed in Brdy.*

Fear that someone might have a better defense, might deviate from the balance of terror, has always been a typical cold war attribute. But only if Moscow were to protest Trump’s “space force,” if it were to see in it a game changer, could one speak of a new “Star Wars.” But it’s precisely these nuances that fail to interest resolute Trump-bashers.

*Editor’s note: Brdy is a range of hills in the Czech Republic, southwest of Prague.