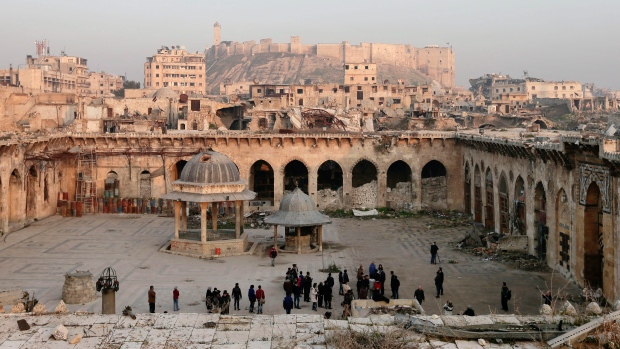 Although the American president announced on Wednesday that he has “beaten the Islamic State” in withdrawing American forces from eastern Syria, the Islamic State group remains and Bashar Assad’s victory looms ahead.

“We have defeated ISIS in Syria, my only reason for being there during the Trump presidency.” With this tweet on Wednesday afternoon, Donald Trump announced the withdrawal of American forces from eastern Syria. Around 2,000 American soldiers, mainly U.S. Army Special Forces, are deployed in this region controlled by the Kurds. The announcement has shocked some among Republican ranks. A withdrawal would have dramatic consequences for the United States in the region and in the world, said Sen. Lindsey Graham. “It would be a big win for ISIS, Iran, Bashar al-Assad of Syria, and Russia,” he added. The White House has indicated that the withdrawal will take place within 60 to 100 days. Last week, the United States’ special envoy to the international coalition to defeat the Islamic State group, Brett McGurk, maintained, “Nobody is declaring a mission accomplished … If we’ve learned one thing over the years, an enduring defeat of a group like this means you can’t just defeat their physical space and then leave.”

Is the Islamic State Group Defeated, as Trump Suggests?

No. The Islamic State group is still established in southeast Syria, where it controls the villages of Soussa and Al-Chaafa, as well as pockets of desert close to the Iraqi border. Around 2,000 jihadis hide there, according to the Syrian Observatory for Human Rights. Among them are foreigners, including some French. It is probably in this area that Fabien and Jean-Michel Clain, the two brothers who claimed responsibility for the 2015 attacks in Paris and Saint-Denis on Nov. 13, are hiding.

They are fighting against the Syrian Democratic Forces, an alliance of Kurdish and Arab soldiers. The SDF are supported by planes and drones from the international alliance. Some Western soldiers are also deployed on the ground and French special forces assist in front-line combat. The battles are formidable. It took three months to finally end up driving the Islamic State group out from the town of Hajine on Thursday. The SDF lost close to 550 men and just under 1,000 jihadis were killed. “Daesh has hold of territorial positions in the east of the country. Their revival by the Syrian Democratic Forces with the alliance’s support is the top priority,” announced the Minister for Foreign Affairs, Jean-Yves Le Drian, on Tuesday.

What Are the Consequences for the Kurds?

Terrible. Several days ago, Turkey announced that an offensive “east of the Euphrates river” was imminent. Turkey considers the Democratic Union Party, an offshoot of the Kurdistan Workers’ Party which controls the region, a terrorist group, and refuses to deploy its army along the border. In the spring, the Turkish army and Syrian rebel groups placed under its control seized the town of Afrine, situated near Aleppo.

A Turkish offensive would be complicated, even rendered impossible, by the presence of American forces in the region nicknamed Rojava by the Kurds. “The United States has conceded to Erdogan’s demands. The Turkish invasion is imminent. The alliance must give us the means to defend ourselves. If not, Daesh will reinstate itself and European countries, including France, will be attacked again,” maintains Khaled Issad, a representative from Rojava in France.

What Are the Consequences on the Ground in Syria?

For Assad’s regime, it is the confirmation of his victory on the horizon. An American withdrawal paves the way for Assad’s regime to recapture nearly all of Syrian territory. Thanks to the massive decisive military support from Russia, two years ago the regime regained the areas controlled by Syrian rebels in the west and the south, except for the province of Idlib. Now one can consider the recapture of the half of the country which had previously eluded Assad, primarily all the territory belonging to the old Islamic State caliphate, the region of Raqqa and Deir el-Zor, which had been liberated by the international coalition. This is especially true since the SDF fighters, faced with imminent Turkish attack, could go back up toward the north to defend Rojava. There could be a decision to reach an agreement with Assad’s regime which would allow them some autonomy, something the Kurds have already tried to do. But Damascus and Ankara could also decide on an opportunistic alliance that would wipe out all dreams of Kurdish autonomy.

This retreat is shortsighted and naïve, according to Charles Lister, director of the Counter-Terrorism and Extremism program at the Middle East Institute in Washington, D.C., who quickly reacted to Trump’s decision. “For the United State’s allies and for its opponents, it is really about a “retreat” rather than a ‘victory.’ On a geopolitical level, this is not just a dream scenario for ISIS, but also for Russia, Iran and the Assad regime, all of whom stand to benefit substantially from a U.S. withdrawal,” Lister said. Lister’s remarks came shortly after a spokesperson for the Russian Minister for Foreign Affairs said that the American presence in Syria had become “an obstacle to a peaceful solution,” accusing Washington of illegally maintaining its troops.