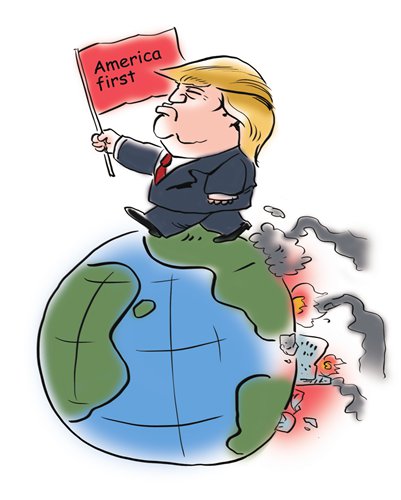 It has been two years since Donald Trump entered the White House, and his presidency has had consequences, both direct and indirect, on political life across the world. Given that the United States is the most powerful and, as a result, most influential, country in the world, that’s no surprise. There are admirers and imitators of Trump in almost every Western country; his “America First” slogan has become populist and conservative parties’ most-widely adopted tagline.

While Trump’s influence is clear, much less obvious is the misunderstanding that his first two years have engendered: No country can claim to come before other countries − unless you are America. There simply is no other country that can unleash the kind of economic and military power that would intimidate any other empire in history. Angela Merkel’s Germany certainly cannot make such a claim. Despite being a wealthy country, it could be crushed by Vladimir Putin’s Russia from a military standpoint. So much so that the country has played host to American soldiers for decades.

Trump was keen to highlight the presence of U.S. soldiers on German territory, stopping off to meet them at the Ramstein base on his return from Iraq. France has a powerful military but a weak economy, as its “gilet jaune” nightmare with protesters shouting for “more work” right under Emmanuel Macron’s window demonstrates. Anyone that has taken up the world’s most frequently repeated slogan has not been listening to Trump’s message over the two years of his presidency; that is, only the United States has a claim on coming first.

If Trump’s first legacy is this misunderstanding, the second is one of fear. The world hoped that the rise to power of a great entrepreneur would ignite the global economy. The reverse has been true, and we have seen a slowdown with the initial effects of Trump’s war on tariffs, unleashed in the first two years of his presidency, starting to be felt. Forecasts by the Organization for Economic Co-operation and Development show a downturn in 2019. The OECD has warned that if the White House continues its strong-arm tactics over trade with China, 2020 will be worse than 2019. The global economy grew by 3.7 percent in 2018 and is forecast to grow by 3.5 percent in 2019. By 2020, growth could slow to 3 percent.

The reason for this is clear − China and the United States are the world's largest economies. If they weaken each other, the repercussions are on a global scale. Hundreds of millions of Chinese have climbed out of poverty. The country has the world's largest car industry and the highest number of internet users. It also has the second-highest number of billionaires and is home to some of the wealthiest and most powerful tech industries. The interconnected nature of global markets means that a slowdown in the two largest economies has consequences even for the poorest countries. The result is an increase in the tendency to migrate toward richer nations.

Two years of the Trump presidency have also left many of the big questions over international politics unresolved. The Syrian war is not yet over, as yesterday’s bomb on a bus in Afrin, which killed several civilians, reminded us. The war in Yemen is ongoing with no solution in sight. Libya, which Trump has declared an almost total lack of interest in, remains in chaos. Meanwhile, the situation in Afghanistan is so desperate that Trump would like to pull troops out.

Conditions in eastern Ukraine have worsened, especially following clashes in the Kerch Strait where Putin's soldiers defeated Petro Poroshenko’s men on Nov. 25. Trump has had no positive effect on any of the world’s existing crises. Given the unlikelihood of Kim Jong Un ever unilaterally relinquishing his nuclear warheads, the crisis with North Korea also looks likely to worsen. Trump has indisputably overseen a deterioration of relations with Iran, after his withdrawal from the agreement signed by Barack Obama, which had brought a marked improvement to the relationship between Tehran and the West. Everything may get better. That is if it doesn't get worse.