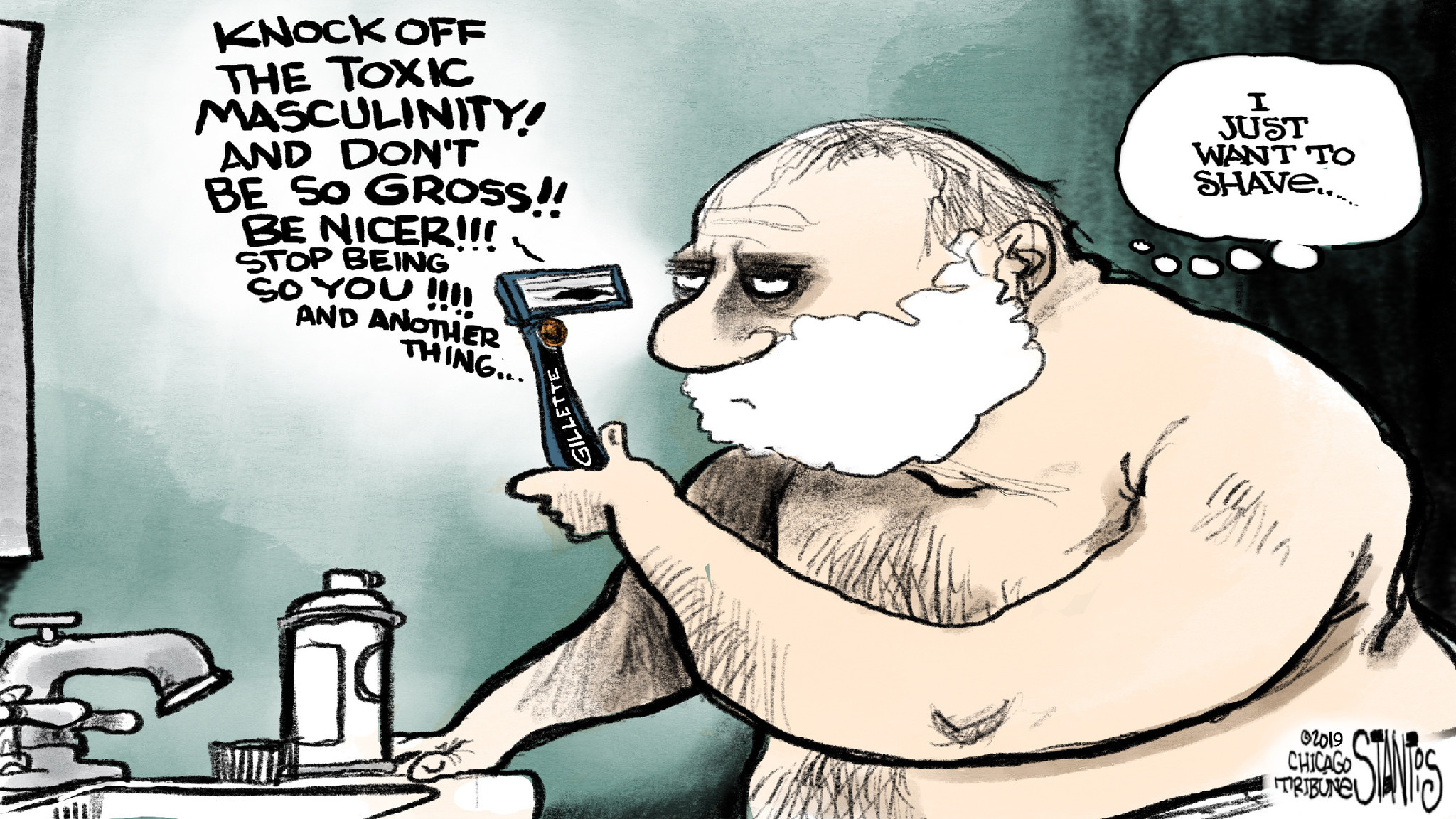 The social media instigator of the week was a commercial for razors. There were outbursts of anger and calls for a boycott; a “war on masculinity” is said to be underway. In reality, men are threatening themselves above all.

The Holocaust and the Inquisition, crusades, genocides and world wars. Drug cartels and the North Korean regime, human traffickers and torturers, the Islamic State and al-Qaida: all of these are men’s business. It may be uncomfortable for men, but it’s indisputable. Nonetheless, this paragraph alone will elicit angry reactions — from a subgroup of men that is very active in social media. Their members perceive such facts as personal attacks.

None of this is to say that women aren’t capable of violence, cruelty, outrageous idiocy or ruthlessness. But in reality, men are the ones who have generally been at the helm during the greatest atrocities in history.

The good news: We’ve actually been aware of this for a while. That is, we men.

The Universal Declaration of Human Rights, for example, which was adopted 70 years ago, was written by five men under the leadership of a woman. A central goal of this declaration, which was signed by 48 countries ruled mostly by men, is the end of thousands of years of male privilege: true equality, without regard to “race, color, sex, language, religion, political or other opinion, national or social origin, property, birth or status.”

Many human rights violations are supposed to be condemned by the declaration: torture, repression, slavery, exploitation and exclusion. These human rights can be read as a document of male self-awareness too.

Even more shocking is that a commercial from a razor manufacturer created such an uproar this week. In case you missed it, it’s a clip from the company Gillette.

The YouTube version alone was viewed 20 million times in the first five days, and the dislike button was clicked 1 million times. Videos in which others get really riled up about it found an audience of millions. Newspapers and TV channels reported on it. Celebrities called for a boycott of Gillette products. In social media, users posted videos of themselves throwing Gillette products into the trash. On a British morning show, the hosts discussed whether a “war on masculinity” was underway.

Why? Because Gillette, which for decades has delivered tired clichés about men, tried something different for once. A commercial in which certain male behaviors were criticized: boys who fight and tease, gropers in TV comedies, flirts, condescending snobs, posers and bullies. Bad role models. If you watch closely, you can even detect a bit of self-criticism at the beginning, when a boy fleeing his tormentors, rips through a screen projecting an old Gillette commercial: “The Best a Man Can Get,” as you already know.

The message is that this idea of “best” must be redefined, at the latest, following the #MeToo movement. And that includes the belief that you shouldn’t act like a scumbag.

But the commercial isn’t being criticized primarily because Gillette, that factory of masculine clichés, is desperately feigning thoughtfulness. Instead, it’s being criticized as “anti-men advertising.”

In fact, the commercial is raising an issue that is discussed in the humanities and social sciences in the U.S., under the term “toxic masculinity.” In other words, certain forms of male behavior that are considered harmful, from sexual harassment or even assault to other forms of violence or aggression to — depending on the author — male domineering. The term has been linked in multiple academic disciplines to Donald Trump, a man known for having bragged to other men that he could grab women between the legs without consequence.

At Most a Reason To Shrug

There is obviously a subgroup of men in the Western world that is not to be overlooked and feels threatened by such discourse. There is notable overlap with right-wing circles, from #Gamergate to the Alternative for Germany party. I find that striking, because in theory we all agreed long ago that beating, groping, rape, demeaning and other such behaviors should no longer be part of the program. Thus, a commercial like this should elicit a shrug at most.

But, in reality, current images of masculinity are often pretty toxic. The strictly scientifically oriented American Psychological Association, which is not suspected of being an extended arm of radical feminism, recently released new guidelines for “Psychological Practice with Boys and Men.” The term “toxic masculinity” doesn’t appear in it, but some other sobering facts do. For example, 90 percent of violent crimes in the U.S. are committed by men. We have a similar situation in Germany.

“Many boys and men have been socialized to use aggression and violence as a means to resolve interpersonal conflict,” according to the APA guidelines. What’s more, “Men who rigidly adhere to sexist, patriarchal masculine norms also tend to endorse and commit higher levels of intimate partner and sexual violence toward women.”

The overwhelmingly male authors of the guidelines indicate that men are often the victims of other men. Men kill each other four times more often than women kill each other. They are less likely to be diagnosed with depression but more likely to be addicted to alcohol or drugs — presumably because men should, for God’s sake, not be whiny, and thus prefer to attempt self-therapy with alcohol or drugs. That’s how it goes when it is already hammered into you as a boy that a man is supposed to just grit his teeth.

In other words, certain self-images of men can be toxic for men themselves, too.