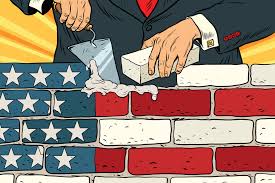 It has been reported that the United States Armed Forces in Korea are among the defense facilities that may have their budget converted so it can be used to build the border wall with Mexico. According to reports from AP and CNN, Command Post TANGO in Seongnam and the unstaffed air vehicle hangar in Gunsan are included on the lists sent to Congress by the Department of Defense.

Command Post Tango is an important facility for the ROK-U.S. Combined Forces Command, a command bunker designed to weather a nuclear attack.

The national emergency declared on the Mexican border came about after Congress only partially approved President Donald Trump’s demands for border wall construction funds in its final bill for next year. If a national emergency is declared, the executive branch can redirect $6.6 billion dollars without congressional approval, money which it will take from the national defense budget. The problem is that the U.S. has considered reducing the budget for the U.S. Armed Forces in Korea, including the ROK-U.S. Combined Forces Command Wartime Command Facility. If it does this, it could reduce or even withdraw its armed forces in Korea, citing a lack of funds. Moreover, this budget conversion from the U.S. Armed Forces in Korea comes during a time when there has been no progress in the denuclearization negotiations with North Korea. This kind of approach from the U.S. is worrisome in that it may shake the foundation of the South Korea-U.S. alliance and the trust between the two countries.