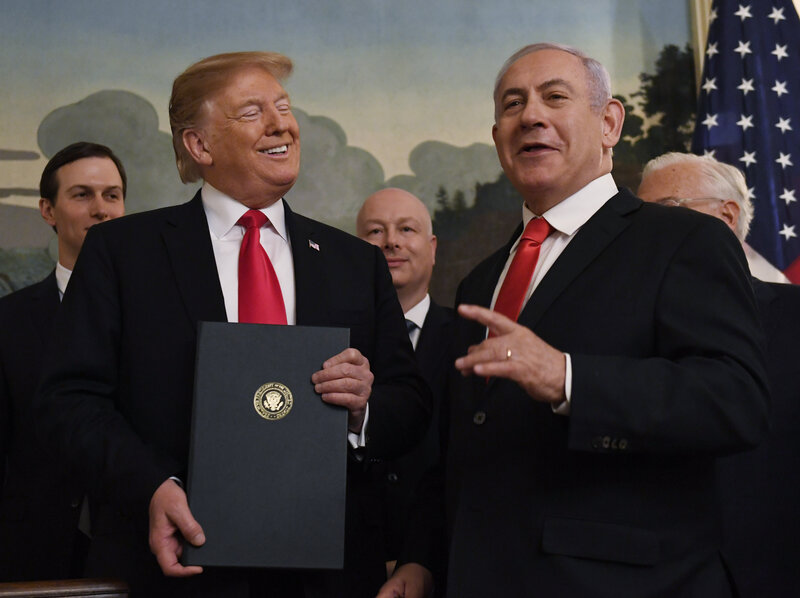 Forty years after the Egyptian Israeli peace treaty was signed on March 26, 1979, President Donald Trump announced that the the U.S. would now consider the Golan Heights in Syria to be subject to Israeli sovereignty. He made the announcement on the exact same date and in the same place that the treaty was signed. The symbolic timing and history of the move can’t be ignored; the time and place are significant for both Benjamin Netanyahu and Trump. Trump hailed Netanyahu, despite his criminal record, underscoring the depth of the American-Israeli relationship, and not forgetting to dedicate the pen he used to sign the declaration to Netanyahu and leaving behind the other pens with which the previous three treaties were signed.

Trump’s decision, which violates all international resolutions, doesn’t entail any legal or political significance and contradicts all previous treaties signed by previous administrations, including the Clinton administration , which included the Rabin treaty of 1994 in which Rabin made promises to then Secretary of State Warren Christopher, almost reaching Israeli-Syrian consensus if it had not been for minor details pertaining to Lake Tiberias and the insistence by the late Syrian President Hafez Assad that the Syrian borders remain alongside the lake. The relationship remained contentious after reaching a settlement and after the establishment of an Israeli warning station was rejected.

One cannot dispute the precarious nature of the American decision to recognize Golan. But it won’t change the political, geographical or demographic facts which suggest that the decision was made to facilitate Netanyahu’s reelection as he faces a fierce battle, and seeks to legitimize the U.S. decision on the international stage, leveraging America’s pro-Israel bias just as news is leaking about a plan to develop the occupied Golan in order to absorb a 250,000 settlers within a framework of Judaizing the territory and changing its demographics.

The timing of this announcement wasn’t random given its apt and historic nature, especially given that Syria is worn out due to its crisis and is still suffering the tragic repercussions and continuous Arab isolation such that it will require years to regain its position and strength. A series of events also paved the way for such a decision: the reaction by the Arab community which is unable to play a productive and effective role in a number of American resolutions since the U.S. moved its embassy to Jerusalem and halted its support of the United Nations

Relief and Works Agency for Palestine and its coordination with the Palestinian Authority.

On the other hand, there is a cost which Syria and its allies will be able to impose on Israel, as this decision will unify the opposition and enhance the Iranian presence and Hezbollah in Syria as it justifies not being closer than 80 kilometers (approximately 50 miles) the same way Russia managed to eliminate Iranians from being in the Golan directly alongside the Golan borders. This American move won’t contribute passing the “deal of the century” which is being rejected by the vital players in the Palestinian field, meaning the Jordanians and Palestinians. The decision also puts U.S. allies on the spot as they seek to pass the deal in order to devote time toward resolving the conflict with Iran and exposing the Syrian opposition, which has bet on settling with Israel in the event a favorable political change in Syria takes place. What will they be negotiating over if Golan exits the conflict?