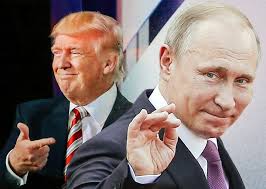 In Donald Trump's shaky conception of the world order, his relationship with Vladimir Putin is as ambiguous as it is central — a relationship for which the Mueller report on Russian interference and the panoply of derivative investigations have not yet finished shedding light on its shenanigans and gray areas.

The two men continue to have much in common, starting with their disregard for the rule of law. In stopping by Sochi on Tuesday to dine with Putin, Secretary of State Mike Pompeo went to try to soften the edges of a relationship which, above all for Trump, has been complicated by a number of geostrategic concerns since their Helsinki summit in July 2018. With Russia in a position of strength, Foreign Minister Sergey Lavrov will easily be able to, in a press conference, promote a “constructive dialogue” between Washington and Moscow, while remaining vague about the eventuality of a Trump-Putin meeting on the sidelines of the Group of 20 leading economic nations’ Osaka summit.

Here, we can clearly see the limits of what a former diplomat quoted by The New York Times calls “transactional muscular unilateralism” that Trump claims to have put into practice since he came to power in the name of the slogan that so excites his base: “Make America Great Again.” The viability of his approach remains to be seen, particularly regarding Kim Jong Un’s North Korea, which, far from being intimidated, has tactically cozied up to the Putin regime - an idea of the world, founded on the showdown, in which, in the U.S. trade war with China, it is primarily American consumers who will foot the bill.

In reality, Trump has diligently served a number of Russia’s principal interests, acting to weaken NATO, sowing discord within the EU, putting himself at odds with almost all U.S. allies or abandoning Syria to Moscow and Bashar Assad.

In Venezuela, in fact, he got a dose of his own medicine in being “muscled” by Russia, which, now pushing the limits of its influences into America’s “backyard,” is working to keep President Nicolás Maduro in power in the face of White House hawks’ efforts to oust the “Chavista” regime.

In a nutshell, Trump is succeeding only at drawing trouble. It is by the same logic, if we can even talk about logic, that the climate around the Iran issue is deteriorating, with a dangerous risk of escalation, on top of everything and in total contempt of the value of the multilateral argument.

Not content with having withdrawn from the Iran nuclear deal in May 2018, the Trump administration reimposed sanctions on the Islamic Republic. The sound of army boots can be heard, carried by news and suppositions of a military deployment, applauded by Israel and Saudi Arabia. Along with Pompeo, the indelible John Bolton, formerly the man behind George W. Bush’s invasion of Iraq in 2003, and today, Trump’s national security advisor, has long been campaigning for an overthrow of the Iranian regime by military intervention. Real prospect or simple provocation, the mere allusion to it defies understanding, given all the damage the war in Iraq has done. There again, these tensions are pushing Tehran toward Moscow, the two capitals having found common ground on Syrian soil.