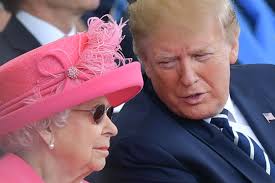 This week, Europe commemorated the 75th anniversary of Operation Neptune, the massive landing operations carried out by the United States and Great Britain on the Normandy beaches in France, which hastened the end of World War II.* The commemoration recalled President Donald Trump’s previous visit to Great Britain, a visit that, given the style of the White House occupant, was not without controversy.

But, if there was anything that provoked discussion that even the royal family's protocol spokesman needed to clarify, it was the fact that after his speech at the state banquet held in his honor by Queen Elizabeth II at Buckingham Palace, Trump placed his hand on the elderly queen’s back instead of bowing or extending his hand. Although the gesture appeared somewhat affectionate and done in the context of communicating closeness, when viewed under a cold light it becomes a metaphor for the reality of both countries and the nature of the bond that unites them. Trump’s protective pat ended up becoming a political gesture symbolizing the fact that since World War I, the U.S. has provided the only guarantee that the singular British nature would survive.

And the thing is, the country that once ruled the seas has become a second-rank power. It has not even had an aircraft carrier in service since December 2010, when it decommissioned the HMS Ark Royal, a twin of the Invincible, a ship remembered with sadness, which participated in the South Atlantic conflict. Great Britain will have to wait until 2020 for the new, updated HMS Queen Elizabeth to actually enter service, equipped with modern U.S. F-35B fighter jets.

Although British Minister of Defense Gavin Williamson claimed recently that “the U.K. is a global power with truly global interests,” and that “we must be prepared to compete for our values and our interests far, far from home,“ Great Britain has already played its role in history regarding grand international strategies.

For example, Zbigniew Brzezinski, in his now legendary work “The Grand Chessboard: American Primacy and its Geostrategic Imperatives,” prophetically defined Great Britain as “a retired geostrategic player, resting on its splendid laurels, largely disengaged from the great European adventure in which France and Germany are the principal actors.“ He used the term geostrategic to refer to those who possess the national will to exercise power beyond their borders.

Surely this is different from how the British see themselves. They believe that they act calmly in extreme situations, showing the famous British “stiff upper lip,” allowing them the kind of introspective moment one associates with smoking a pipe, and providing necessary reflection before making large decisions. Sociologist Elias Canetti, winner of the Nobel Prize in literature, in his eagerness to identify popular symbols in countries, compares the much-touted English individualism to the ocean, maintaining that “the Englishman looks like a captain with a small group of men on a ship,” in that “he is almost alone as a captain, even largely isolated from the crew.“

That view is probably what motivated England’s conduct as arbitrator of continental European policy.

Without a doubt, the British were a maritime, commercial and financial power that dominated the world during the 19th century and turned its Victorian era into a synonym for the maximum expression of grandeur an empire can reach. Nevertheless, the fact that Trump failed to show respect for protocol not only implied that he had no knowledge of the unique nature that the British believe they have, but by touching the queen, Trump’s gesture symbolized the era of twilight in which the British have found themselves.

The commemoration of the Normandy landing also recalls that World War II marked the end of a transition, when Great Britain ceased to be the great world power it was and the U.S. took its place. But this process also permitted British diplomacy to continue, guaranteeing European equilibrium for some time. In fact, in the European Union, the U.K. determined the balance between the economic architecture constructed by Germany and France’s mistrust and international outlook. But, with Brexit, Britain’s former role already seems a thing of the past.

Today Trump, in his eagerness to weaken the European Union, defends Brexit against the insistence of the pro-Europe faction to reverse the process. The U.S. should simply respect the decision that the British people made in 2016.

In exchange for an immediate exit without an agreement with Brussels, that is to say, in exchange for making a hard Brexit, Trump is offering the British a broad trade agreement that would end up distancing London from Europe. Moreover, Britain would give up its historic role of guaranteeing European equilibrium. This would literally convert Great Britain into an appendage or a natural way station for the U.S. on the old continent. It is in this context, one that always involves U.S. defense interests, that we need to understand the Twitter controversy Trump had with Sadiq Khan, the Muslim mayor of London and advocate for a new vote concerning Brexit. Trump skewered him as a loser who needed to pay attention to serious crime problems in London, which, in addition to being the British capital, is also the anti-Brexit capital. Trump’s support for a hard Brexit did not end there. He also suggested that negotiations with the European Union should be led by Nigel Farage, the euroskeptic that led the Brexit faction. Trump also endorsed Boris Johnson as future prime minister. This is the Johnson who divided pro-government political forces in Parliament, decisively weakening Theresa May and sabotaging her efforts for a slow Brexit with a soft border between the two Irelands.

The failed exit from the European Union through a soft Brexit, which is what May wanted, ended her government and revealed the deep division, distress and egotism present in British Parliament to the point that the discord recalls that sententious quotation from Montesquieu: “As all human things have an end, the state we are speaking of will lose its liberty [England], will perish [...] It will perish when the legislative power shall be more corrupt than the executive.“

Even though Brexit is a reflexive act meant to defend British singularity against multiculturalism and the massive immigration that has resulted from requirements by the European Union, it meanwhile completely serves the interests of the U.S., which conceals its intentions, offering the economic protection London needs to avoid isolation. However, this protective umbrella is not sufficient in the case of Britain’s questionable overseas possessions, such as the Falkland Islands, which, after Brexit, will become the territory of the European Union.

In this light, the cycle of history sometimes resembles the cycle of life. Today the ancient and proud motherland has become an old lady who needs her prodigal son.

*Editor’s note: Operation Neptune was the code name for the allied landing operations known as Operation Overlord and referred to as D-Day.